T-shirt #334: The Empire Strikes Back - If you only knew the power of the Dark Side 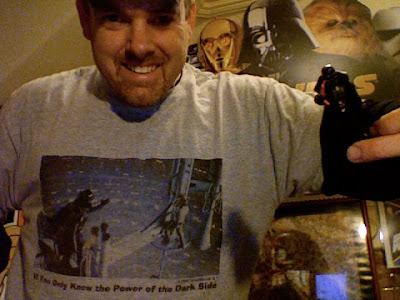 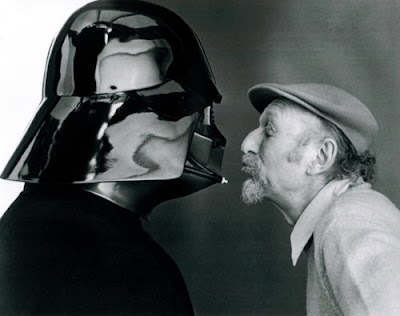 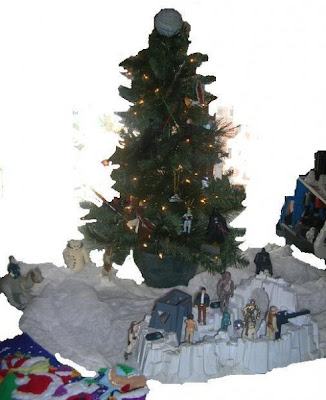 I know. You’re jealous of my original Vader figure, complete with the cape and lightsaber.

With the recent passing of Irvin Kershner (http://www.latimes.com/news/obituaries/la-me-irvin-kershner-20101130,0,1523496.story), I was glad I had an Empire Strikes Back t-shirt left to wear.

Even though Empire wasn’t my favorite Star Wars movie when I was young, it has made its way to the top of my list. I think that’s because when I was 6 I liked happy endings; I wanted the good guys to win. Instead, the first thing I saw was the words “It is a dark tie for the rebellion.” And, I got to see the main good guy get his hand sliced off and find out the second-in-command bad guy is his father. I was left wondering what would happen to Han Solo as Boba Fett took his frozen body away. I remember thinking that Vader must have been lying to Luke, there’s NO WAY he’s his father (My nephew had a similar reaction when I told him, a story you can read here: http://davestshirts.blogspot.com/2010/01/t-shirt-14-star-wars-kids-drawings.html). I did really like Yoda though (how could you not?).

Now, I love Empire because the bad guys win. I love seeing Darth Vader at his worst, choking admiral after admiral. I never get tired watching the tension between Han and Leia. I love the AT-ATs (in case you don’t know: http://starwars.wikia.com/wiki/All_Terrain_Armored_Transport). Yoda still rocks. Bounty hunters are badass. And the final scene between Luke and Vader, well, I put it on a t-shirt.

(Yes, this is one of my own design. Well, I used the pictures and sayings that are listed at http://shop.starwars.com/catalog/category.xml?topcatID=1300264;category_id=1301512, but I created this one.)

Even though it has been 30 years since its release (wow), The Empire Strikes Back remains among the best sequels ever made (It’s the best in my opinion, but I can see how others might argue for The Two Towers, Godfather II, The Dark Knight, or Breakin’ 2: Electric Boogaloo). It is also the US #12 top grossing movie of all time when you adjust for inflation (http://www.boxofficemojo.com/alltime/adjusted.htm). I guess what I’m saying is I’m not alone in thinking it’s a damn great movie.

If you are one of those people I run into that says “Nope, I’ve never seen any of them” when Star Wars comes into the conversation (it tends to around me), I hope someday you at least watch Episodes IV (a.k.a Star Wars: A New Hope or Star Wars the original or Star Wars, the first one that was released) and V (The Empire Strikes Back). Then at the very least you can tell if someone’s Yoda impersonation is crap!

Even though it was last week, I like to remind myself what I am thankful for every day. Today, I am thankful for Irvin Kersher. He was a huge part of a movie that has been a big part of my life. I hope to be part of a movie someday and although I know it won’t be as good as Empire, you can bet there will be Empire quotes and references in it (see also: Kevin Smith). Thanks Irvin, the Force will be with you. I am off to star setting up my Star Wars Christmas tree with the Hoth scene below it…

For more on Irvin Kershner:

For more on The Empire Strikes Back: http://starwars.wikia.com/wiki/Star_Wars_Episode_V:_The_Empire_Strikes_Back

For my other Star Wars shirts (still one more to come!):

Donated this one to my Little Brother: http://davestshirts.blogspot.com/2010/04/t-shirt-102-star-wars-revenge-of-sith.html