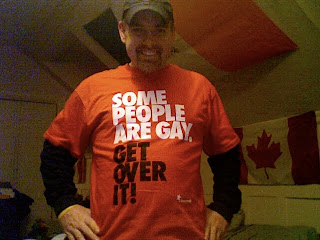 My name is Dave and I am straight. I didn’t choose to be straight, I’m just straight. I didn’t learn how to be straight from my parents. As I mentioned (http://davestshirts.blogspot.com/2010/11/t-shirt-316-i-only-sleep-with-best.html), I was raised Catholic, so there was not a lot of “sex talk” happening at my house. What I did learn from my parents was how to treat people well. I never saw either of my parents judging someone based on their skin color, gender, sexuality, or anything that wasn’t a result of a decision they made.

Yes, yes, yes. I know some people still like to think that if someone is gay, it is a lifestyle they are choosing. I have two things to ask these people.

One, when did you choose to be straight? I know I never did. I am attracted to women. I am especially drawn to smart women…smart women with a good sense of humor and who watch sports. Everyone has his or her preferences. You go with what turns you on, and what makes you happy. As long as it involves consenting adults, I say go for it.

Two, why would you choose something that might potentially lead to intolerant reactions and behaviors from your family, friends, co-workers, anti-gay groups? Seriously, do you think gay people are making this so-called “decision” just to upset you? Or, do you think they are doing it because it feels right?

And I’ve heard it over and over again. It’s immoral and GOD said so in The Bible (or whatever the holy book of choice). To the Christians, I ask when did Jesus say he was against homosexuals? Whenever Christians claim “It’s in The Bible”, they quote the Old Testament. I found this little gem online (http://carm.org/christianity-and-homosexuality) that only has Old Testament quotes. I also found this one (http://ldolphin.org/Homo.shtml) about what Jesus said regarding homosexuality – nothing. But, what did Jesus and (as I wrote about: http://davestshirts.blogspot.com/2010/09/t-shirt-245-coexist.html) and just about EVERY major religion teach: The Golden Rule – Treat others as you would like to be treated. So to all you straight Christians, Muslims, Jews, etc. ,etc., I ask you this: Would you wanted to be treated differently at all because you were straight? Christians, how do you think Jesus would treat gay people if he were here today? I’m no religious scholar, but I’m thinking he’d be a lot more friendly, tolerant, and LOVING than you…

There is also the issue of gay people in the military. Another no-brainer if you ask me. If you are brave enough to join (not me) and good at finding and killing the bad guys, does it really matter what and/or who you do in your bedroom? I want the military that defends my country to be filled with the people that are the best at what they do, not just the best straight people. The Pentagon recently completed a survey of the military (the results were leaked but will be released by the Pentagon on December 1st) and 70% of those who were surveyed thought the effect of repealing “Don’t Ask, Don’t Tell” would be “positive, mixed, or non-existent”. I hope they also simply asked, “Do you think ‘Don’t Ask Don’t Tell’ should be repealed?” I guess we’ll see in December. The Daily Show did a great bit about McCain and this issue:

Just like I don’t think someone’s sexuality makes them a better soldier, I don’t think it affects the so-called bonds of marriage. 50% of marriages are now ending. And I wonder how many of the 50% who are still married are actually happily married. I have never been married, but have had (in addition to countless “lucky ladies” I dated) about 10 what I’d call “serious/girlfriend relationships” over the years, but none lead to marriage. Had one of those led to marriage, I don’t see how two men or two women deciding to get married would effect ours. I know gay dating hasn’t effected my straight dating. I don’t know the details, but I know married couples have certain rights that non-married couples don’t have. If any two people are willing to publicly announce and make their togetherness “official”, why should it matter what gender these two people are? I really hope the happiness of your marriage doesn’t depend on someone else’s marriage.

Like most of the problems (in this and other countries), I think the solution starts with our youth. And it’s sad to say, but a lot of younger people have not been acting tolerant towards gay people either. It didn’t take long for Google to show me studies (http://www.nmha.org/go/information/get-info/children-s-mental-health/bullying-and-gay-youth) or news (http://miamiherald.typepad.com/gaysouthflorida/2010/11/equality-forum-recalls-brandon-bitner-14-who-killed-himself-by-running-in-front-of-tractor-trailer.html) that gay teens aren’t always treated well. The It Gets Better project (http://www.itgetsbetterproject.com) was started to show these teens that you can live a happy and fulfilling life no matter how people mistreat you because of your sexuality. Oh, yeah, then there is this shirt…

I am not gay myself, but I do know this. If any one of my family, friends, or even Facebook friends came out and told me they were gay, I wouldn’t treat them any differently than I do now. And although they won’t have to face the decision, I hope none of them would treat me differently if I were gay. The shirt really gets it right. Some people are gay, and everyone needs to accept that and get over it. I hope at the very least people (gay or straight) have family or friends that love them and accept them for who they are. I know if you have that, it’s a lot easier to be happy…