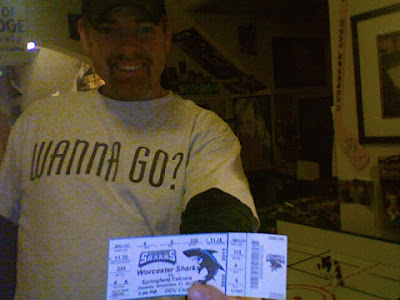 My name is Dave and I love hockey. And I will freely admit that I do like the fights quite a bit. But as a huge fan of college hockey (where fights are very rare), they aren’t the reason I watch the game. Although when I’m at a Bruins or Sharks game and a fight does break out, I am usually one of the fans cheering the loudest.

Some argue that fights shouldn’t be a part of the game and they are the reason hockey isn’t as popular as baseball, football, or basketball. I think these people either don’t watch hockey enough and/or have never played hockey. Fights are part of the game and I think they eliminate some of the “wimpy” things you might see in other sports: trash talking, cheap shots, showboating, bean balls, or disrespect of the opposition. If you do any of this stuff in hockey, you are asking for a fight so you’d better be ready.

Denis Leary had it right in the book version of his show No Cure For Cancer (p. 39): “That’s why I like hockey: you drop your gloves and beat the shit out of them right there. They’ve got a special box where they make you sit for a couple of minutes, have a rest, a drink of water, and then you come back out whenever you’re ready. I think that’s a great idea. I think we should combine that with real life. I think everybody should have a penalty box at their jobs. You don’t like your boss? Beat the shit out of him-take a five-minute penalty. People would be showing up to work at five o’clock in the morning: “I’m gonna hip-check you into the Xerox machine! I hate you!”

The Love of Hockey is no secret in the McGrath house, and there were years Santa brought me VHS tapes with titles like “Best of Terry O’Reilly Fights”, “Blood on the Ice”, or “Best Fights of John Kordic”. One year, I got a tape that was simply called “Probert vs. Domi”. They had two fights in 1992, and while Domi skated around like he won the first one, the second one is pretty one-sided. But, I’ll let you judge for yourself…

Even though hockey isn’t just about the fights for me, there is a fight in hockey that I think everyone should be behind. Hockey Fights Cancer (http://www.nhl.com/ice/page.htm?id=25343) has been active since 1998 and you can order really cool t-shirts like this one (http://davestshirts.blogspot.com/2010/04/t-shirt-95-hockey-fights-cancer.html) from my t-shirt blog here: http://shop.nhl.com/category/index.jsp?categoryId=10777782

I wore this shirt today (thanks, Sam!) because I went to watch a Worcester Sharks (http://www.sharksahl.com/index.asp) game with my Little Brother and one of the Hope Lodge guests. Like I described here, http://davestshirts.blogspot.com/2010/07/t-shirt-199-worcester-sharks.html, we got the tickets for free from the Sharks. There were a few scrums, but nothing that turned into a full fight (my companions and I were hoping for at least one!). Oh yeah, the Sharks also came back with two 3rd period goals and won the game 4-3! Thanks again for the free tickets, Sharks!

Looking around online for what I wanted to include in this blog, I found a site I can’t believe I had never be on before: http://www.hockeyfights.com. If you’ve never seen it before, you’re welcome. And you might also want to check out their YouTube channel: http://www.youtube.com/user/hockeyfightsdotcom

Oh yeah, in case you didn’t know, “Wanna Go?” is what you ask someone if you are playing in a game and want to fight. I’m betting a few other choice words are spoken between hockey players about to fight, but those are the ones that will get it started. And in case you missed it, here is a nice, old school, slugfest from a recent Bruins game: