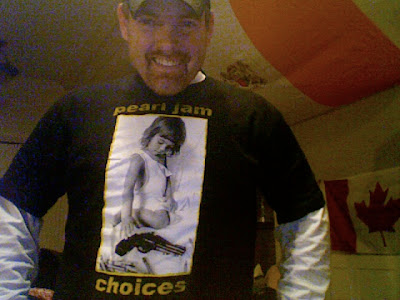 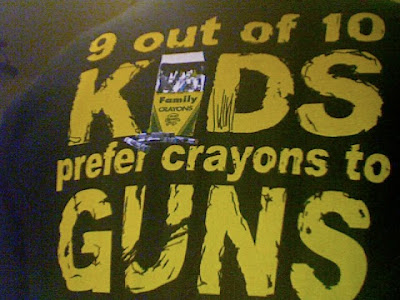 Outside of the obvious family and friends I am thankful for (see tomorrow’s blog for them), Pearl Jam is right up there on my list.

Pearl Jam came into my life during my senior year in high school, the same time another very influential entity entered in it: my brain cancer. I first heard “Alive” played on WAAF and loved watching Eddie’s acrobatics in the “Even Flow” video, but I didn’t really get into PJ until the summer I was going through cancer treatment. My older brother Jon (looking out for me as always) brought me in his Discman (high-tech for 1992!) and a bunch of his CDs. One of them was Ten, and I was sold. Unlike the party/get chicks music of the 80’s, this stuff was a lot darker and was about real life. I have no doubt it helped me visualize the chemo killing my cancer, and I had no doubts then I would be a Pearl Jam fan for life.

By the time their second album Vs. was released, I had already taken many punches and lost many fights in my battle with alcohol. But much like my fight with cancer, Pearl Jam was also with me through the “Drinking Days”. My ritual was to pop in my Ten cassette with the goal of being drunk before the end of the first side. I often made my goal, and left to fulfill my second goal: get to the party.

As I began listening (and drinking) to the Vs. more, I started making my own version of the lyrics that related to my drinking. “Don’t call me daughter” became “Don’t call me sober” or “Don’t call Dave sober”. “Got a gun, fact I’ve got two” was “Got a drink, fact I’ve got two” and “Glorified version of a pellet gun” became “Glorified version of a Gordon’s bottle” (Gordon’s was my cheap-o vodka of choice). It was a perfect mix of Pearl Jam angst and post-cancer anger, brewing into an alcohol explosion.

I was very excited when my buddy across the hall in my dorm said his Dad could get us tickets to the Pearl Jam show at the Garden. The concert ended up being less than a week after Kurt Cobain killed himself, which definitely added to the feel of the night. Eddie and the boys rocked the place on a stage full of candles and with a great set list (http://pearljam.com/show/boston-garden-apr-11-1994). It was the first time I heard “Corduroy” (and it was only the 4th time they played it live: http://pearljam.com/song/corduroy), which has become one of my favorite PJ songs. It was definitely a bright spot during a year that was darkened with drinking and drinking-related ER visits and rehab and even more drinking.

A year later I stopped drinking, but continued to abuse Pearl Jam and would continue to over the years. I bought the albums, went to shows, and defended them (to this day, thanks to Carl!) whenever anyone dared badmouth them around me. When my friend Glen taught me how to play guitar, Pearl Jam songs were among the first I wanted to know (I recorded myself playing a few for the blog, but thought the originals would serve it better). Simply, these guys became “my band”.

Not only are they my band because of the music, I admire how they take on responsibility with their fame. And even though I might ask “Hey, what happened to that whole Take on Tickemaster thing?”, I know they have helped and continue to help people. Guitarist Mike McCready suffers (like me) from Crohn’s Disease, and has played benefit shows and been active trying to increase Crohn’s awareness (http://www.ccfa.org/about/news/mccreadypsa, http://pearljam.com/news/mike-mccready-discusses-restroom-access-law-king-5-tv). Mike also struggled with drinking – I think I need to meet this guy!

So if you’re reading this Pearl Jam (and Eddie, I know you’re just a guy like me), I just wanted to say thank you. Thank you for helping me through some tough times and for inspiring me. You are to me what The Beatles are to you. Thanks, I really hope we get to hang out someday…