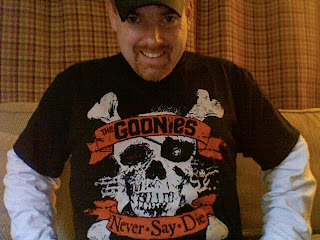 My name is Dave and I am a child of the 80’s. It was a decade that started with the USA winning gold in Olympic hockey and the release of The Empire Strikes Back (AC-DC’s Back in Black and The Shining also came out in 1980, but I was too young to appreciate those back then). As the 80’s moved along, there was Pac-Man and other video games (along with video game themed TV shows and cereals), personal computers, Cabbage Patch Kids, New Coke, The Challenger tragedy, The Red Sox in the ’86 World Series, Nintendo (or “Intendo” as my grandmother called it), my Crohn’s diagnosis, and the fall of the Berlin Wall.

There were also tons and tons of great movies that came out in the 80’s. There was the Indiana Jones Trilogy, Return of The Jedi, E.T., Airplane, The Breakfast Club, Fletch, Say Anything, The Princess Bride, Caddyshack, Ghostbusters, Big, Ferris Bueller’s Day Off, Stand By Me, Nightmare on Elm Street, Hoosiers, Field of Dreams, Back to The Future, When Harry Met Sally, Die Hard, The Terminator, The Untouchables, etc., etc., etc. (I’m sure I’m missing one of my or your favorites, but this is what I came up with on the spot)

Right in the middle in 1985, there was The Goonies. It came in 9th in the US Box Office top grossing films of that year, but it had pretty stiff competition and was beaten by Back to the Future, Rambo, Rocky IV, The Color Purple, Out of Africa, Cocoon, The Jewel of the Nile, and Witness. If you count Back to the Future as the only other kids movie, it came in #2 for that year.

It is hard to believe it has been 25 years since The Goonies was released, but there are still plenty of sites, new releases, and YouTube reminders that will insure Goonies really never say die…

The Goonies original trailer, The “Never Say Die” clip, The Truffle Shuffle, Mistakes from the movie, The deleted octopus scene, and the cast reunion – Enjoy, and have a great Sunday!