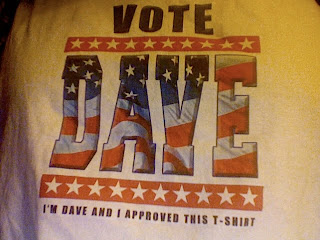 This t-shirt was a present from my cousin (thanks, Katie!) and I saved it for Election Day.

I did complete my civic duty today at the Order of Ahepa Lodge (just Googled this: http://ahepa.org/dotnetnuke/About/Mission.aspx) in Worcester.

I was glad no one that was running was named Dave or David, because I thought my shirt might not be allowed inside the election location…

It was Election Day in 2004 and I decided to wear this shirt (http://davestshirts.blogspot.com/2010/04/t-shirt-105-bush-sr-and-w-dumb-and.html) to go cast my ballot. I approached the check-in table to tell the guy what street I lived on, but couldn’t even get it out before he told me I wasn’t allowed to wear the shirt if I wanted to vote. He explained to me that there was a rule that stated you couldn’t have any “material that might influence voters” within a certain amount of feet of the polling building.

I politely asked him if he could show me the rule, but wasn’t expecting he had to flip through some 1,000-page book to find it. I apologized, but he seemed not to mind that he actually had to do something and make use of the rulebook. Then the police officer came over and the polling guy explained to him what was going on. He finally found the page and showed me the passage, and I told him I would turn the shirt inside out.

So I did that, checked in, voted, and checked out. As I left, the police officer leaned over and quietly told me, “You didn’t need to convince me who to vote for.” I laughed and left, thinking positive thoughts of W’s days coming to an end.

But, we were going to have for more years. I should have known after the Sox won the World Series, that also asking Kerry to win was too much.

So, I had no problems voting today. One guy actually said, “I should have that shirt, I’m a Dave, too!” Maybe Worcester is just a little more relaxed about the official rules than Westboro?

Hope everyone got out and voted today! (Oh, and I will include a video later about why everyone should vote for me…)