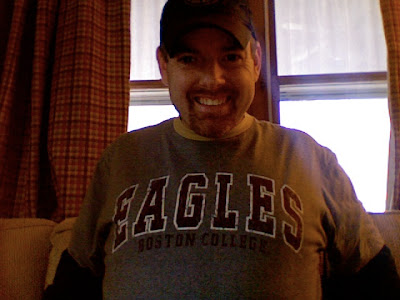 That’s what my nephew’s reply was when I asked him if there was anything he wanted me to include for my blog on his birthday. He then told me it should also be the first thing that I wrote. What can I say; it’s hard to argue with a birthday boy!

The birthday boy and I had a bond from the second he was born - we shared the same middle name (my mother’s maiden name). After he had grown some, when Brendan had to make choices for himself, he made a decision that would bond us even more. He chose to root for the Boston College Eagles…

Even though he was alive in 2001, Brendan doesn’t remember when BC won their first hockey championship since 1949. In 2006, he was well into his Eagle Allegiance when BC made their first of three straight trips to the college hockey championship game. BC led when he went to sleep, but my brother Jon said the next morning went something like this: Brendan walked downstairs and checked the final score on NESN Sportsdesk. As soon as he saw The Eagles had lost, he didn’t say a word. He just shut the TV off and walked into the kitchen for breakfast. At least he didn’t have to watch BC hit the post with a second left on a shot that would have sent the game to OT. The following year, The Eagles led the game after two periods but again failed to win it all. This time, they gave up the game-winning goal with only 19 seconds left to play. Ouch.

I am glad to report that since 2007, BC has had a lot more success and won national championships in both 2008 and 2010. Brendan has been able to proudly wear many BC “Frozen Four Champs” shirts and sweatshirts, and even got a picture autographed by BC coach Jerry York (who, by the way, is one of the nicest guys alive – all I did was email him and ask him if he’d sign the picture for Brendan’s first communion and he was glad to when after I sent it to him). Although the BC hockey team has been stumbling out of their #1 preseason gate, I look forward to rooting for them with my nephew in many seasons to come. Happy Birthday Brendan….you are awesome!