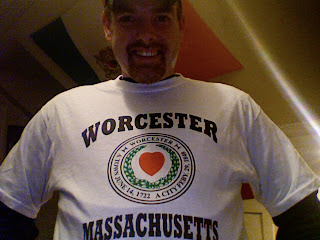 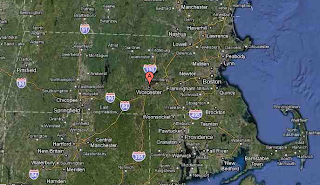 I’m Dave, and I live in Worcester.

I would have never expected it, but I do currently live in the 2nd largest city in New England (http://www.worcesterma.gov/quick-facts estimates the population at 182, 596 – that’s a pretty accurate estimate!). I grew up in nearby Westboro and when I went to Worcester it was usually to see something at The Centrum (now the DCU Center, but I still say Centrum), visit my father’s work, or to see some kind of doctor. I rooted for Holy Cross to beat BC in Worcester. I went to my first concert in Worcester (Whitesnake opening up for Motley Crue, see also: http://davestshirts.blogspot.com/2010/02/t-shirt-53-motley-crue-theatre-of-pain.html). I spent a lot of time (especially before a concert) at the Worcester Galleria. Later, I would go to the Greendale Mall in Worcester.

More important than any of these “pleasure visits”, I was treated for my Crohn’s and brain cancer at the UMass University Campus (http://www.umassmemorial.org) in Worcester. So, because of great doctors and top-notch facilities located in here in “Woostah”, I can call myself a survivor. UMass is also where I went to be treated for one of my kidney stones and my second Crohn’s hospitalization 2 years ago. So even though healthwise you might not say I have been the luckiest person, I was lucky to be near Worcester when I was sick.

In addition to two of my biggest heroes (my parents) having Worcester roots, my biggest celebrity hero was raised in Worcester. Even though his website doesn’t include it in his bio, Denis Leary (http://www.denisleary.com) grew up here. You can read about my man-crush on Denis at: http://davestshirts.blogspot.com/2010/06/t-shirt-180-rescue-me.html

Recently in my life, Worcester has been the location of a great career change and businesses that have shown me the power of giving back.

It was three years ago that I finally went to the American Cancer Society website to see if they had any job openings. The Night Manager position for Hope Lodge (http://www5.cancer.org/docroot/subsite/hopelodge/ma_worcester/wr_index.asp) had just been listed, and the rest is history.

After starting at Hope Lodge, I quickly witnessed the giving nature of many of the local businesses in Worcester. The Niche Hospitality Group (http://www.nichehospitality.com) brought dinner for the Hope Lodge guests every Monday night, and has ever since I started here. That’s about 175 meals just since I’ve been here! After one phone call to the Worcester Sharks (http://www.sharksahl.com), I was told there would be free tickets to any game Hope Lodge guests wanted to go to (this also included the AHL All-Star game two years ago!). Also one time we had a 17-year-old guest who wasn’t going to be here for a Sharks home game, and the Sharks had a player come and visit him (This story was published on the AHL website: http://ism3.infinityprosports.com/ismdata/2006080401/std-sitebuilder/sites/200601/www/en/news/onthebeat/index.html?article_id=8262). It only took one email to the Worcester Tornadoes (http://www.worcestertornadoes.com) and Hope Lodge guests wouldn’t have to pay to go see a baseball game too. And every week, a groupf of students from Holy Cross (http://www.holycross.edu) come and visit Hope Lodge to play games and hang out with the guests.

Even though I never thought I would live here, Worcester is now my home. I like it because it is near most of my family in Westboro. I like it because it is a lot more diverse than Westboro. I love the work and the people my job in Worcester has put me in touch with. Worcester has really helped me in many ways, and I am lucky to be able to be a part of this city and in a position to try and give back. So if you ever hear someone badmouth Worcester, I hope you direct them here…