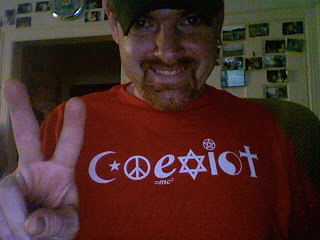 Unlike yesterday’s shirt, I know exactly what this one is all about…

I’ve written it before, but I still think there are two major contributors to just about all of the world’s problems: religion and greed. Today, as the shirt suggests, I will be focusing on religion.

There really is only one way to peace, and that is for everyone to accept other’s viewpoints when it comes to religion. Just about every major religion has some version of the Golden Rule:

Bahá'í Faith - Lay not on any soul a load that you would not wish to be laid upon you, and desire not for anyone the things you would not desire for yourself. (Bahá'u'lláh, Gleanings)

Buddhism - Treat not others in ways that you yourself would find hurtful. (The Buddha, Udana-Varga 5.18)

Christianity - In everything, do to others as you would have them do to you; for this is the law and the prophets. (Jesus, Matthew 7:12)

Confucianism - One word which sums up the basis of all good conduct....loving-kindness. Do not do to others what you do not want done to yourself. (Confucius, Analects 15.23)

Hinduism - This is the sum of duty: do not do to others what would cause pain if done to you. (Mahabharata 5:1517)

Islam - Not one of you truly believes until you wish for others  what you wish for yourself. (The Prophet Muhammad, Hadith)

Jainism - One should treat all creatures in the world as one would like to be treated. (Mahavira, Sutrakritanga 1.11.33)

Judaism - What is hateful to you, do not do to your neighbour. This is the whole Torah; all the rest is commentary. Go and learn it. (Hillel, Talmud, Shabbath 31a)

Native Spirituality - We are as much alive as we keep the earth alive. (Chief Dan George)

Unitarianism - We affirm and promote respect for the interdependent web of all existence of which we are a part. (Unitarian principle)

Zoroastrianism - Do not do unto others whatever is injurious to yourself. (Shayast-na-Shayast 13.29)

(Thanks to http://www.scarboromissions.ca for these quotes)

So if all of these major religions have the Golden Rule, where does all this religious intolerance come from? Here are my guesses:

People thinking that their religion is THE religion, and all other religions are wrong.

People taking other parts of scripture and twisting it to justify their actions (“This is what God wants me to do”).

People thinking that if someone claiming to be a certain religion acts in a certain way (extremist, violent, intolerant), then EVERYONE from that religion will act that way and believe the same principles.

People thinking that their idea of God and how to get into heaven is more important than how they treat other people.

So, what is the solution? This shirt has the answer. In order to live in peace, we need to accept that not everyone will have the same religious beliefs. We need to teach the next generation to not judge others based on religion. The major religions should focus on the Golden Rule above all other rules. Honestly, what do you think God (if you believe in God) wants? For people to argue and fight over what is the “correct” way to worship, or to treat others with love?

I was raised Catholic, but I no longer believe in this church (for many, many reasons). I go to Mass a few times a year but I do it for my family, not for God. I think Jesus had a lot of great ideas on how people should treat each other, but I can’t honestly say I believe he was God in the flesh. I do believe God will come to earth when one of two things happen: Either things get so bad here that God has to do the biggest episode of Intervention ever, or we get it right and God comes to congratulate us. I believe that The Holy Trilogy did get it right:

Jedi / Star Wars - It’s an energy field created by all living things. It surrounds us and penetrates us. It binds the galaxy together. (Obi-Wan Kenobi)

Everything in the universe is connected, and the only way to live peacefully is to believe we are all in this together…