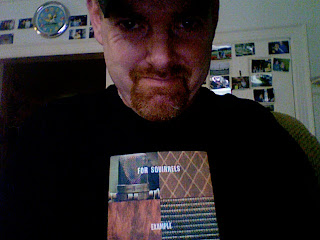 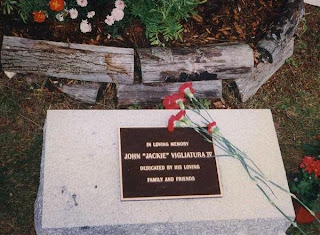 I made this shirt specifically for today.

A little over 15 years ago, my sister Carolyn told me about this band she had seen. She loved them and was lucky enough to hang out with the band after the show. She told me that the guys were awesome, and the singer was an amazing person she thought would be one of my best friends if we ever met.

Then, exactly 15 years ago today, For Squirrels was driving back to Florida from a show they had done in New York. One of the van’s tires blew; the van turned over, and crashed. The singer (Jack Vigliatura, 21 years old), bassist (Bill White, 23 years old), and tour manager (Tim Bender, 23 years old) all died at the scene. It was right before their first major-label record, Example, was going to be released.

Since the tragedy, I have enjoyed listening to For Squirrels music while wondering about future CDs the world was robbed from hearing. I went with my sister to see them play in 1996, but (as my sister and the surviving band members would figure out) it simply wasn’t For Squirrels (although I do really enjoy their follow-up band Subrosa’s Never Bet The Devil Your Head album).

Later that year, a memorial was dedicated to Jack at the home he grew up in located in Spencer, MA. I went with Carolyn, and even though I had never met Jack, it was a real emotional experience. Fighting hard to hold back the tears, I read a poem I wrote called “The Mighty J.V.”. I could tell how much this guy meant to everyone there, and the tragedy of what happened hit me hard. Some of Jack’s relatives wanted a copy of the poem and told me they really enjoyed it, which made me feel better for my teary recital. My sister and I also wandered around the neighborhood a bit and saw Bay Path Road and Smithville Road, (names in a For Squirrels album and song) which was really cool.

A copy of my poem eventually made it to Jack’s father, and he wrote my sister telling her how much it meant to him. He also included a rare CD that had an unreleased For Squirrel’s song “Van Gogh” on it, which made me very happy. When my first volume of poetry was published, I made sure Mr. Vigliatura got a copy of it. A few years ago when he was looking to publish his own book, he called me and we talked for a while. I felt lucky to be able to tell him how much Jack’s music means to me and how I feel closer to Jack every time I play “Mighty K.C.” on my guitar.

It has been 15 years since the horrible accident, but For Squirrels music will always be a part of my life. I thank Carolyn for always being an awesome sister and telling me about great bands and For Squirrels for making some of my favorite music. You guys will always live on…

Here are some For Squirrels related things I hope you enjoy:

We stand in doubt,

At half mast for the flag boy,

Not knowing what to do, say, or think.

When I come face to face with Fate

What should I ask?

How could you take the sun?

How could you steal this light?

And what are we to say?

I can only hear the echo of a lost voice,

The static of an unknown frequency.

He's singing of his future,

By the grace of God he went-

Thoughts come to me of

What could have been.

Why did Destiny take from us

This success waiting to happen?

And, what are we to think?

With my barrage of questions,

But I get no answer.

A circle of thoughts with no reason or answer

Asking why did this happen?

I wish I had known you, she said we would have been best friends…

And their video for Mighty K.C.: