T-shirt #246: HELLO MY NAME IS Inigo Montoya. You killed my father. Prepare to die. 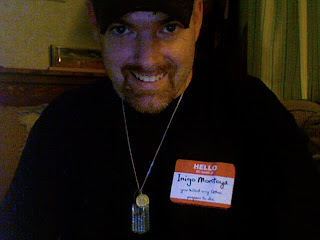 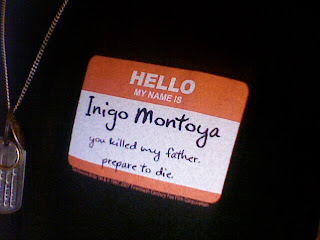 This shirt is from my awesome brother Jon who saw it and thought it was a “must” for the blog…I couldn’t agree more. If you don’t get the reference, I really, really, really feel bad for you…

15 years ago today, Jon and his wife Jen got married. I was lucky enough to be the best man, and didn’t surprise people when my toast started with a reference to the Bruins (Jon was born less than a week before Bobby Orr’s Stanley Cup winning OT goal in 1970). Part of my toast questioned if I could find anything wrong with either Jon or Jen (other than Jen’s allegiance to the New York Mets), and 15 years later they have added to their list of great qualities by bringing three priceless gifts into both of their families and creating a family of their own.

Now as “Daddy” and “Mommy”, Jon and Jen have passed down their willingness to help others, gift of laughter, intelligence, and passion for sports to their children. Like their wedding started 15 years ago, their house is full of love. Hearing the welcoming excitement that “Uncle Dave is here!” puts a smile on my face every time I walk in the door. It is the perfect cure to anything bad that might have happened that day.

One of the passions that brought Jon and Jen together was a love of movies. Before I get to that though, I’d like to share this story: It was the summer of 1993, and I was calling my friend Kristen (Jen’s sister) to see if she wanted to hang out. Kristen (who had told me that Jen liked Jon) wasn’t home, so I asked Jen why she hadn’t called Jon and asked him to do something. She was afraid he would say no, and I (although I hadn’t spoken to Jon about it) grunted her if she asked him over to watch a movie he would say yes. She said, “Well, I don’t know…”, but before she could finish her sentence I yelled downstairs, “Jon, phone call!”

Jon did end up going over and spending time with Jen that night, and yes, they got along quite well. Although I’m not sure if it was the first night, I know one of the movies they watched when they started dating was The Princess Bride (Kristen can write add details to this story about this if she wants to). It was a fitting beginning to a wonderful romance that, like in the movies, you can tell it was meant to be. So congrats Jon and Jen for 15 years and thank you for making every life you touch a better and happier one, I love you!