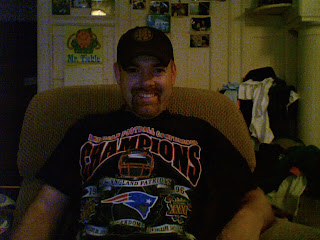 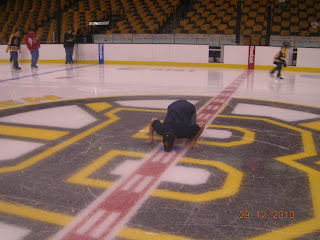 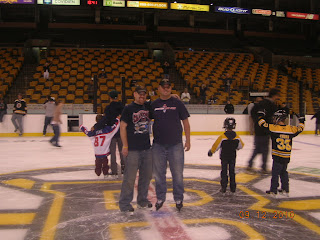 I thought this shirt, another one from my father (Thanks, Dad!), would be a good one to wear for the beginning of the Patriots season. And watching the Pats game today was a great end to an awesome weekend…

I started Friday by taking my “Little” bowling in Shrewsbury. We were definitely the two youngest people there, and had an awesome time. Afterwards he wanted to go to That’s E! (a store in Worcester with used video games, DVDs, toys, and comic books), so he didn’t have to twist my arm too much! Friday night it was fun time with JB and CO. We went to Owen O’Leary’s in Southboro (renamed “The Skellig” in E-lationship) and watched a movie afterwards.

Saturday, JB and I went to Fenway for a Red Cross blood drive. There were a bunch of nurses and Star Wars people in attendance (Darth Vader, a stormtrooper, Han, and Chewie), so there wasn’t much to complain about. I also got a free t-shirt out of the deal! After Fenway, it was off to the BC-Kent State football game. BC won handily, and I made my friend Patrick’s son laugh about 253 times (Apparently he had been asking all week about “seeing Uncle Dave”).

Today, I had to rise early, but it was well worth it. My awesome father gave me his Bruins season ticket holder passes to skate at the Fleet Center. I met Patrick there, and we had a great time (see pictures and video)…thanks again, Dad! After the skate, it was off to my friend Scott’s to watch the Patriots game and to see his first baby, an adorable daughter. As if the weekend couldn’t get any better, the place Scott decided to order food from had my favorite sandwich of all time – The Fat Chicken (a sandwich with chicken fingers, French fries, and mozzarella sticks)…I am trying to eat better, but not today!