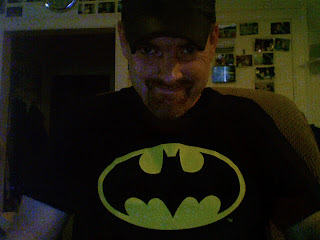 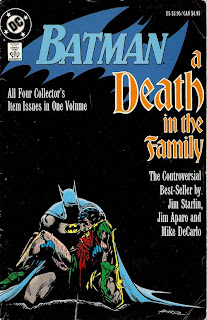 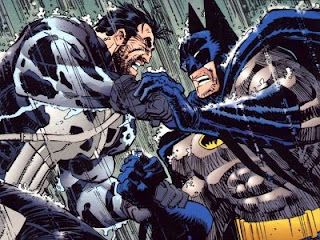 This shirt was donated from Hot Topic (http://www.hottopic.com/hottopic/Homepage.jsp), and continues my superhero theme for the week.

Batman shares a few similarities with my shirt from yesterday, The Punisher. He witnessed the murder of close family (his parents), he has no superhuman powers, and he is waging his own war on crime. Unlike The Punisher, Batman does not kill the bad guys, preferring to leave their punishment up to the justice system. Batman also has successfully been translated to the big screen…

But my memories of Batman start on the small screen. Just about every Saturday morning in the late 70s and early 80s, the Superfriends cartoon was on the tube at the McGrath household. Some of you may remember this opening:

During the week in the early 80s, watching the Batman TV show from the 60s (on back-to-back with the He-Man cartoon) was always a great way to get ready for school. I loved the “Biff” and “Splat” graphics every time there was a punch or other violence, Robin’s phrases like “Holy Bill of Rights, Batman!”, how you could tell Adam West and Burt Ward were really “climbing” buildings horizontally, and how so many episodes depended on Batman saying “If I could just….reach…my…utility…belt.” Looking more closely at the full cast from the show (http://www.imdb.com/title/tt0059968/fullcredits#cast), I found a few surprises. The Penguin was played by Burgess Meredith, who later played Mickey in the Rocky movies and the really old man in the Grumpy Old Men movies. Also making appearances on the show were Vincent Price, Milton Berle, Bruce Lee, Joan Collins, and Zsa Zsa Gabor.

Although the Batman comic books had been being made since 1940, it wasn’t until the late 80s and the movie buzz that I read my first Batman comic. Again, it was my older brother who would provide me with the reading material. Death in the Family, The Dark Knight Returns, and Arkum Asylum were my favorites. I couldn’t believe how different, darker, and crueler the storylines were compared to my previous exposure to the Batman character…I liked it.

The first movie (if you don’t count the 1966 one with the TV cast) starring Michael Keaton as Batman and Jack Nicholson as The Joker was a huge hit with the McGrath boys. When the VHS came out, my brothers and I were quickly learning all the lines and doing our best Joker impersonations. The quality of the sequels in the 90s went downhill with each release, becoming more “cartoony” and just plain ridiculous with the Batman and Robin debacle in 1997. Luckily, Batman on the big screen was saved with Batman Begins in 2005 and The Dark Knight in 2008 (And yes, I admit to buying a Heath Bar and bringing it in to the theater when I went to see The Dark Knight).

Even though the Batman character has produced higher quality movies, I still say Punisher is #1 in my book. The Punisher and Batman actually met in a crossover issue, but the result was a draw. Maybe I should write the Punisher vs. Batman screenplay?