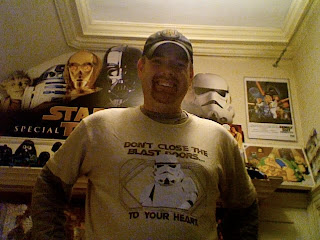 My name is Dave, and I am a Fanboy (see also: http://www.imdb.com/title/tt0489049), or a Star Wars dork. Which, if you understand the meaning of my shirt, you might be yourself. My Fanboydom is hardly news to most. And as you can see in the picture of my Star Wars Christmas tree (below) and the my shirt, I don’t do a lot to hide it. Although one of my friends calls it “female repellant”, I like to think the right female for me would appreciate the passion behind it. Even if I got rid of my whole collection (which I will at some point), you can take the boy out of a Star Wars room, but you can’t take Star Wars out of the boy. Here are a couple of my favorite Star Wars stories with more SW shirts and stories to follow…

Star Wars is the first movie I remember seeing. Of course now that memory is just more feelings than a moment I can replay in my mind. Let’s just say after I saw A New Hope (Episode IV, or the “first one from the 70s” as some call it), Star Wars related merchandise became top on my list of Christmas and Birthday wishes. To me, The Godfather of all Star Wars toys was (and still is) the Death Star Playset. First only to the AT-AT and Ewok Village, it was the Red Ryder BB Gun of its day. The Christmas morning Santa left it for me, was, well...watch:

Notice my excitement and pointing, trying to share my joy with my older brother Jon. Only to be frustrated when he doesn’t acknowledge me… “Classic Dave” my family might say, and “Classic Middle-child” a professional might say. I was watching this video with my brothers, sisters, and cousins during Christmas in the late 90s and my older sister Carolyn said, “Wow Dave, it’s 20 years later and you are still getting the same things for Christmas!” Funny, sad, and true. And we all laughed.

One of my favorite Star Wars stories happened my first year working in special education. I was an aide at an adolescent psychiatric unit on the grounds of Westborough State Hospital. The students there had serious emotional and behavioral issues, and carried diagnosis like Major Depression, Bipolar Disorder, and Schizophrenia. Luckily, as you will read, a lot of them still had a great sense of humor.

Every week on Friday, we watched an “educational movie” with the students that had earned it by having a good week in school. After begging and finally convincing the lead teacher I could make Star Wars educational, we watched it on the last Friday of the school year. Many of the students had not seen any of the movies, so I was looking forward to see how they would respond. I was happy to see most of them enjoying it, and amused by how amazed they were when I pointed out all the mistakes (like the Stormtrooper hitting his head on the door…it’s there, about 1 hour 22 minutes into the movie, Stormtrooper on the right).

They were really getting into it at the end, and we watched as Luke made his final run down the Death Star trench. Then, Luke heard Obi Wan’s spirit say “Use The Force, Luke.” Without hesitation, one of my students said, “Woah! Luke hears voices just like I do!” The whole room erupted into laughter, myself and the student who made the joke laughing the hardest.

So please, do not close the blast doors to your heart...and go B's! 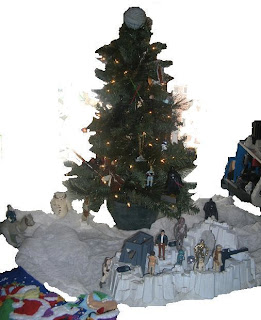