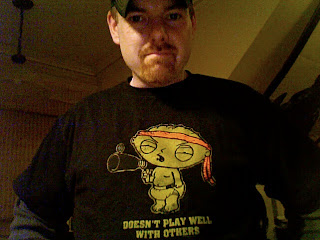 Although this t-shirt pretty much says it all, here are some of my favorite Stewie quotes:

How you uh, how you comin' on that novel you're working on? Huh? Gotta a big, uh, big stack of papers there? Gotta, gotta nice litte story you're working on there? Your big novel you've been working on for 3 years? Huh? Gotta, gotta compelling protaganist? Yeah? Gotta obstacle for him to overcome? Huh? Gotta story brewing there? Working on, working on that for quite some time? Huh? (voice getting higher pitched) Yea, talking about that 3 years ago. Been working on that the whole time? Nice little narrative? Beginning, middle, and end? Some friends become enemies, some enemies become friends? At the end your main character is richer from the experience? Yeah? Yeah? (voice returns to normal) No, no, you deserve some time off.

So, is there any tread left on the tires? Or at this point would it be like throwing a hot dog down a hallway?

Meg (about Peter being retarded): I can never go to school again!

Stewie: Oh, yes, Meg, yes-yes yes, everything was going swimmingly for you until this. Yes, yes, THIS is the thing that will ruin your reputation, not your years of grotesque appearance, or your awkward social graces, or that Felix Ungerish way you clear your sinuses, no no no, it's THIS. Do you hear yourself talk? I might kill you tonight.

Hello, mother. I come bearing a gift. I'll give you a hint. It's in my diaper and it's not a toaster.

Olivia: You are the weakest link, goodbye. (laughter)

Stewie: Ha ha ha! Oh gosh that's funny! That's really funny! Do you write your own material? Do you? Because that is so fresh. You are the weakest link goodbye. You know, I've, I've never heard anyone make that joke before. Hmm. You're the first. I've never heard anyone reference, reference that outside the program before. Because that's what she says on the show right? Isn't it? You are the weakest link goodbye. And, and yet you've taken that and used it out of context to insult me in this everyday situation. God what a clever, smart girl you must be, to come up with a joke like that all by yourself. That's so fresh too. Any, any Titanic jokes you want to throw at me too as long as we're hitting these phenomena at the height of their popularity. God you're so funny!

I was under the impression the name of the show was "Kids Say the Darndest Things," not "Old Black Comedians Never Shut the Hell Up."

Oh hey lady. Hey, what's going on? How are you? Yeah, oh it's just me, Stewie, just being myself, ah yeah. Oh, oh well this here? Oh, it's just my package, yeah just ah just ah my package, God delivered it I signed for it the world keeps on spinnin', yeah.

Stewie: Augh! What the hell do you think you're doing?

Stewie: You were clean fifteen minutes ago, now you're just on vacation.

Stewie: That coffee mug that you have on your desk, it says life's a beach? Umm that's dangerously close to the word bitch isn't it?

Brian: Uhh, yeah that's the joke. Stewie: Oh, absolutely! And nobody appreciates a joke like Stewie, and you know between you and me I think it's a stitch, but some of the other employees found it offensive.

These and more at:

And here's one you have to hear to appreciate: