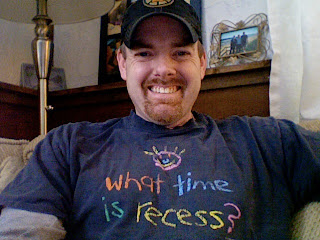 I got this shirt when I was in college. It’s a shirt that I really like because I have only once seen another person wearing one…and that was back when I was a sophomore. I also like wearing it because people tend to react by smiling or laughing when they see it. And, I am a big believer in recess. Whether you actually go outside or to the gym, it is important every day to get your body going and away from work. I think it would be great if every company had “recess time” for all of its employees (I think some do have "rec rooms" with air hockey tables, etc.). Even though it might cut into work time, I bet production would go up if people were allowed to act like a kid again every day. What time is recess? Whenever you want it to be is what I say…here are a few recess related stories from my life:

Once when I was in the fourth grade, we were learning about the Great Plains. It was my turn to read, and by mistake I said “Green Plains”. Of course the ten-year-old minds of my classmates and me found this very amusing and burst out laughing. After regaining composure, I gave it another attempt, but could not stop laughing. After several tries my teacher thought it might be a better idea if we just spend the rest of class outside. Score one for giggling.

When I was in the third or fourth grade, everyone in my grade had recess at the same time as the grade above us. One such afternoon, a kickball challenge was brought on by the “older” kids. Even though they had more numbers and seem more determined, we beat them. The look of disbelief that they had lost to us was priceless.

One recess during sixth grade, my classmates and I doing something that a school would never allow today. It was during the winter, and the hill next to our playground had been turned into a diagonal sheet of ice. Many of us lined up on the top of the hill and were seeing how far we could “sneaker ski” down without falling. I ended up being in the group of a select few that made it down the whole way…one time in about twenty chances.

As I type this, I am seeing images and hearing more about the disaster in Haiti. I am thinking about the people there and sending positive thoughts…I hope you will take a minute and join me. Thank you.