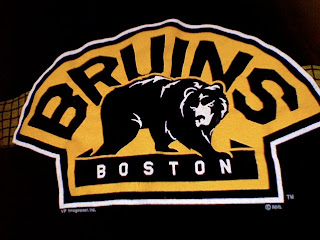 I have been joking with my family and friends that I want to have 365 t-shirts so I can wear a different one for every day of the year. I have no idea how close I am to this ridiculous goal, but those close to me have been very supportive in helping me reach it. Whenever they see a t-shirt that reminds them of me (usually a sports, Star Wars, or funny shirt like “Titanic Swim Team 1912”), they either buy it for me or tell me where to get it.

Although I cherish every t-shirt that I wear, I have come to realize (through two close friends who recently moved and gave many of their belongings away) that I simply do not need them. But, I can’t just simply give them away. Welcome to my t-shirt blog: I will share a picture of the shirt I am wearing that day along with a story or stories that go along with it. I will see how close I get to 365, and I’ll figure out a way to give them all away to people that need them more than I do. I hope you enjoy….

This will be the first of many Bruins t-shirts along the way, so for today I will write about what the Bruins mean to me most: my family. A week after my parents welcomed their first child into the world (my older brother Jon), the Bruins won the Stanley Cup…on Bobby Orr’s overtime goal…on Mother’s Day in 1970. The Bruins were there when this family started, and have been there all the way until today when I watched (with my mother and two sisters) them beat the Flyers in overtime at the Winter Classic at Fenway…(my father and older brother were actually there).

Here are a few of my favorite family related Bruins stories from 1970-2010, with more to follow when I wear another Bruins shirt.

He laughed and replied, “That’s your question?”, and I assured him it was really the only thing I cared about. Afterall, it was Bruins-Habs game 6 and the B’s needed to force a game 7. The Bruins won, I did get to watch the game, and my dad gave his tickets up to be with me in the hospital.