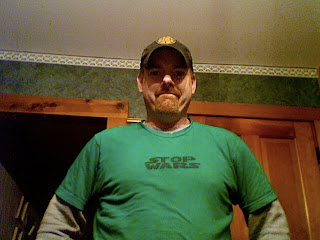 I never have, and hopefully never will understand war. Right now, according to globalsercurity.org, there are 36 wars going on in the world right now (www.globalsecurity.org/military/world/war/index.html). So that means there are 72 groups who disagree so much that the only means they think will end their disagreement is by killing each other. Killing each other until one side gives up. I just don’t get it.

(Before I continue, I would just like to say that this doesn’t mean I am against our troops. They do a job I know I would never do, and I respect anyone that will put his or her life on the line when asked to. I just wish they didn’t have to.)

What are people fighting for? Although I am no history scholar, my guess is that most wars are fought for something (land, resources) or some idea (religious beliefs, freedom). Which means instead of trying to figure out ways to share things or respect differences in beliefs, we are killing.

I don’t know how many different religions there are in the world. Although I was raised Catholic, I have not found a religion I can call my own. I do think there is a God. And I am pretty sure this God does not want us killing each other at all, let alone on a mass scale like war. Also, I don’t think this God would want people killing each other over what they thought He/She was or what person God may or may not have come and spoken to us through. Although I think he had some good ideas, I do not think Jesus is the only way.

So yeah, stop wars. I guess that’s what I’m saying.