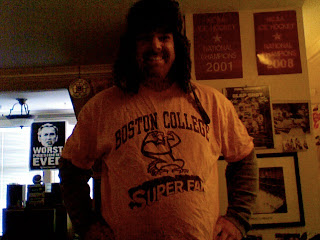 Tonight, I am going to Fenway with my father, older brother, and nephews to see BC play BU in hockey. So, I broke out the Superfan shirt and thought I’d share a little history…and if I cut this entry off short, it’s because I am leaving for the game…but there will be more later…

I was actually there for the birth of the Superfan. It was the fall of 1997, and I was living in Waltham with my friend Scott, who had graduated from BC a year after me. He was in the Pike’s Peak Club, the boosters of the BC hockey team. They were trying to improve student interest in BC hockey (which was on a downward swing from their early 90s success), so they sponsored a trip to UNH to see the Eagles take on the Wildcats in enemy territory. They paid for the bus, the tickets, sandwiches and snacks for the trip up.

Through a lot of oversight, my roommate and I (3 combined years out of college) were named chaperones of the trip. It was about 50 students (2-3 females), the driver, and us. I brought Slapshot to watch on the way to the game. Another thing Pike’s Peak paid for were the Superfan shirts. We all put them on before exiting the bus, and covered them with our coats.

At the end of the national anthem, we all took our coats off and went nuts. The UNH fans were stunned, and competed with our loud chants throughout the game. The unranked Eagles upset the ranked UNH squad, and the Superfans were born.

The BC hockey team ended up having a great season that year, and slowly climbed in the national rankings. They were sure favorites against Harvard in the opening round of the Beanpot Tournament, and just as I had since the UNH game, I wore my Superfan shirt to this game. Harvard won in a stunner, but The Eagles seemed determined to make something of the season.

Now, my Superfan shirt was sometimes washed and sometimes not washed between games, depending on where I was in my laundry cycle. After that loss to The Crimson, I washed it. And BC won the next game. So, I didn’t wash it. And they kept winning. From the first week of February and into April, they did not lose…and I didn’t wash this shirt. I was wearing a white long-sleeve BC shirt under it, and they had become one. I took them off and put them back on as a single unit, knowing well I was helping with the win streak. Then, came the championship game…

The NCAA Hockey Championships happened to be in Boston that year. My friend Scott and I got tickets, and managed to get one for our friend Patrick. Patrick lived in California at the time and flew into Boston for the game, spending less than 24 hours total in Massachusetts. BC played Michigan for the title, and The Eagles were leading well into the 3rd period. Then, with about 7 minutes left, Michigan tied it and the game went into overtime.

In OT, Jamie O’Leary had an open net to shoot at to win BC’s first title since 1949. He hit the crossbar. My friends and I joke that the reason he hit the crossbar was because of me. We used to play roller hockey at Conte Forum when the season was over and they melted the ice and left a perfect smooth surface to skate on. A few times, players on the BC hockey team would join us, like Marty Reasoner, and you guessed it, Jamie O’Leary. Jamie played with us one day when I was playing goalie, and he had a breakaway on me….more later….off to Fenway....

(Back from Fenway...tough loss for The Eagles, but very amusing anti-BC texts to me after the game...Seriously though, who calls a penalty with 2 minutes left????)

Anyway, Jamie O'Leary had a breakaway on me, made a move, and I totally stoned him. Believe me, I was as shocked as he was. So my friends joke that this failure to score on me stayed with him and is the reason he choked in OT.

So, he hit the crossbar, and Michigan ending up scoring, winning the game, and taking the title. Scott, Patrick, and I sat motionless in our seats. I had my head down and my eyes closed. None of said anything, we just sat there in disbelief. I'm not sure how long we stayed like that, but I remember hearing a voice say, "Excuse me, you have to leave now." I looked up, and we were the only ones left in the building. It was just us and this usher. The fans were gone, the teams were gone, and the bands were gone...it was just us. It was the most heart-breaking game I have ever attended...but don't worry, plenty of more BC shirts in the future....go Eagles!

If you want to watch a movie of me telling these stories: