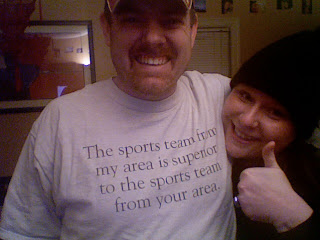 This shirt is one of three I have that are brought to you by The Onion.
Although I would say the statement has held true for the past two hockey games I have watched (Bruins vs. Blue Jackets last night and BC vs. BU tonight), I did not count on the ref handing the game to the less superior team. Last night's high sticking against Lucic (the Columbus player was actually hit by his teammate's stick) and tonight's tripping call against BC with less than two minutes left (Parker and the ref obviously have some sort of special relationship). Total B.S. calls and total B.S. losses. The good news is that I get to hang out with my friend Kelly (pictured with me), and look forward to both The Bruins and BC bouncing back and getting these ridiculous losses behind them. Go B's, go Eagles...and it still sucks to B.U.
Posted by Dave McGrath at 11:21 PM