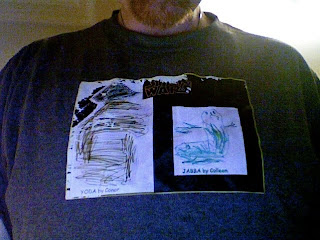 It will be interesting when I do finally run out of t-shirts to get the final tallies on how many Star Wars, Simpsons, Bruins, Red Sox, and BC shirts I have. Even though this is a Star Wars shirt, it is more about something that will always outrank The Holy Trilogy: family. Luckily for me, my family has been very supportive of my Fanboydom. The drawings on this shirt (Yoda on the left, Jabba on the right) were made by my younger nephew and niece. Freakin’ awesome.

It has been great seeing my nephews and niece enjoy Star Wars. Although they did not see the originals in the theatre like I did, they have been exposed to a whole new Star Wars world with the Legos video games, Playskool Toys, and the Star Wars Disney experience. And they have made sure every Christmas and birthday, I get at least one Star Wars related present.

When he was really young, my older nephew liked to “play Star Wars” with me. This usually meant one of us pretending to be Darth Vader while the other one was Luke, and we ran around trying to catch each other (when they were old enough, the roles of Stormtrooper and Princess Leia were added by my niece and younger nephew). One time when we were playing, I remember telling him that (spoiler alert) Darth Vader was Luke’s father. Very much like I did when I first saw Empire Strikes Back, he did not want to believe it and accused me of lying and started crying. I told him I understood it was hard to believe, but he could ask my brother if he wanted to. He did, and was finally convinced when “Daddy” confirmed it. I also remember a few years later he was bragging to his younger brother and sister that “I knew Darth Vader was Luke’s father waaaay before you two!”

So, thanks to my nephew and niece for the drawings. And thanks to my family for not only helping make sure I always get my Star Wars fix, but making sure I know what is most important in life. No, not The Force (although it is important)...all of you!