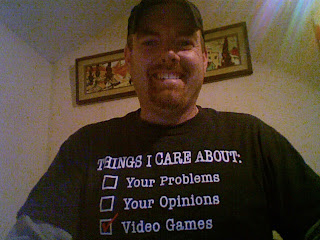 I’ve had this shirt for about a year or so. Although I think that I do care about other people’s problems and opinions, I know there are days when I’d rather just be playing video games. And, that hasn’t changed much since Santa brought The McGraths an Intellivision back in the early 80s. So, here are some of my favs:

2. Castlevania – One of the proudest moments in my video game “career” was beating this game…and this was a game you couldn’t save.

3. Super Mario Brothers – Mushrooms, fireballs, warp zones, a princess that was never in the right friggin’ castle. This game had it all. The best thing was that back then, all the secrets were passed by word of mouth…until Nintendo Power Magazine came out, that is.

4. The Legend of Zelda – The first game I remember you could save your progress and tackle it the next day…I also remember how cool we thought the gold plastic was.

5. EA Sports NHL – In my opinion, the best sports video game ever. You can mention Madden all you want, but Madden does not have fights. (Honorable Mentions: Blades of Steel and R.B.I. Baseball)

6. Star Wars Battlefront II – The best Star Wars game ever made. My only hope (ha ha) is one day they can make a game where it actually looks and feels like you are in the Battle of Hoth.

7. Mario Kart – Both the N64 and Wii games have produced some of the best trash-talk I have ever received and dished out. I freakin’ hate the track on N64 when you are on the highway driving into traffic, and even though I suck at it, I love Rainbow Road.

8. Mike Tyson’s Punch Out – Yes, I beat Tyson. And in true dork fashion, I took a picture of the TV screen. Also one time when I was playing this game, I yelled at my little sister who wasn’t even in the room with me.

10. Grand Theft Auto III – The perfect game you could either play to try and complete missions or just wreak havoc…and the tank code never got old.