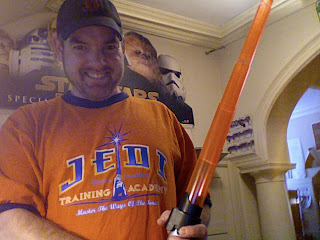 I wear this shirt in honor of my older brother Jon. Tonight, we are having a surprise (although as goes with most of these, there is the question of how much a surprise it will be) birthday party for his 40th. Wow. I remember my father’s 40th birthday party…my brother can’t be THAT old, can he? But, he is. And, like our father, Jon has become an awesome, loving, caring, and selfless one to his own children (who picked out this t-shirt for me). In these 10+ years of fatherhood, Jon has never stopped being the best older brother a guy could ask for. He has been teaching me things (by example, advice, and more recently his writing) since I have been alive, and I know he will continue to.

One of the best lessons Jon taught me (which he might not even realize) was how to be better at laughing at myself. There were times when I would get frustrated and be ready to “spaz out”, and he would make a joke of it: “Okay, go ahead, start yelling and throw something like you usually do and see if that makes it better.” He made me realize that getting so upset over certain things just wasn’t worth it. One time, we were on one of our “adventures” at the Bowman Street Conservation Area (a.k.a. The “Nature Trail”). And adventure was when my brothers and I would walk on the frozen stream with sticks checking out which areas were safe, and usually ended up with us jumping from one ice chunk to another (the point being to stay out of the chilly water underneath). One time we had been there all of about 22 seconds, and I slipped and fell on my butt. I fell on a weak spot, crashed through the ice, and my head was the only part of me spared from the 32.1 degree water. Jon started laughing so hard that I couldn’t get mad or upset, I had to laugh too.

It is good to know that since becoming a father, Jon’s sense of humor has not changed. In the beginning stages of putting some sort of Jon’s Turning 40 project to be named later together, I asked his beloved kids to share some of their favorite “Daddy Stories” with me. Not surprisingly, 2 of them involved farting. The other one involved when Jon and Jen woke the kids up to surprise them with a trip to Disney World. Yes, farts and surprises…they never get old. One time when I was visiting the kids, I was on the floor putting together a Rock ‘Em Sock ‘Em Robots that I had just bought. In the middle of my snapping plastic parts together, Colleen (without speaking a word) walked right over to me, put her butt near my face, and farted. In the midst of my painful laughter, I asked why she did it. “I thought the boys would think it was funny” was her reply. When Jon got home and I told him, he laughed and said, “Well, she knows the classics…”

Speaking of classic McGrath Farts, before Jon and Jen got married, he shared with her (for reasons unknown, I’ll have to ask Jon tonight) what he thought were the three most memorable farts in the story of “Growing Up McGrath”. Now, if you think that’s ridiculous enough, what followed is even more so. After he told her his “Top 3”, he asked me what I thought my “Top 3” would be. In a matter of seconds, I had rattled of the same farts. I then asked my younger brother Tom what he thought were the three most memorable…and he also picked the same ones without much thought. Weird? Maybe. But they made us laugh our asses of then, and they still do now. So thank you to my brother Jon for being such a great big brother and teaching me about family, sports, music, movies, writing, life, and the value of laughter.

You may argue that science should have invented a real lightsaber by now (http://www.wickedlocal.com/westborough/news/opinions/x749215000/McGrath-Wheres-my-lightsaber), but you have taught me the ways of The Force more than any Star Wars movie ever will. You make me proud to tell people that not only are you my older brother, but you are one of my closest friends. Here’s to many more years of laughter, and may farts never cease to be funny…