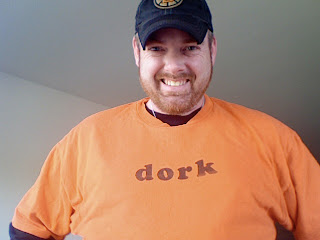 Yes, if the shirt fits… Guilty as charged by this shirt (which was another one from a birthday exchange of t-shirts with my friend Andy). I know it, my close friends and family know it, and there is nothing anyone can really do about it. And yes, Star Wars has a lot to do with it. I have heard some people use the term Star Wars Geek, but I always argue that although someone could be classified as such, I am not one of them. Dork, yes (for instance, today I went to see the original Evergreen Terrace that Simpsons creator Matt Groening grew up on). Geek, no. For the record and using my own and dictionary.com’s definitions, I will try and distinguish between geek, dork, and nerd (Yes, a blog that will teach you something!)

Here are what dictionary.com came up with:

1.a computer expert or enthusiast (a term of pride as self-reference, but often considered offensive when used by outsiders.)

2.a peculiar or otherwise dislikable person, esp. one who is perceived to be overly intellectual.

3.a carnival performer who performs sensationally morbid or disgusting acts, as biting off the head of a live chicken.

"sideshow freak," 1916, U.S. carnival and circus slang, perhaps a variant of geck "a fool, dupe, simpleton" (1515), apparently from Low Ger. geck, from an imitative verb found in North Sea Gmc. and Scand. meaning "to croak, cackle," and also "to mock, cheat." The modern form and the popular use with ref. to circus sideshow "wild men" is from 1946, in William Lindsay Gresham's novel "Nightmare Alley" (made into a film in 1947 starring Tyrone Power).

2.an intelligent but single-minded person obsessed with a nonsocial hobby or pursuit: a computer nerd.

So, looking at the definitions, I am definitely not a geek. I am not a computer enthusiast, I think I am likeable, and I never have been in the carnival or circus. And taking a look at the second entry under nerd, I can see how someone might say Star Wars Nerd might apply to me. Even though I just sold most of my collection on Ebay, I always say you can take the Star Wars stuff out of the boys room, but you can never take Star Wars out of the boy. However, I would still say I am far from being a Star Wars Nerd. Nerds cannot play hockey, baseball, and guitar…I can. Which leaves us with dork. I don’t think I’m stupid or a jerk, I can be ridiculous, and nerd I just threw out. Yes, many of my friends have laughingly called me a “dick” in response to some inappropriate insult I heaved upon them. I also once had the biological proof that I was a “dickhead” (see: http://davestshirts.blogspot.com/2010/01/shirt-4-rangers-suck.html).

So, I would submit my own third entry for dork:

3. A loveable, smart-assed person who can excel in “non-nerdy” things like sports, but who also has a passion for “more-geeky” things like Star Wars and/or animated series.