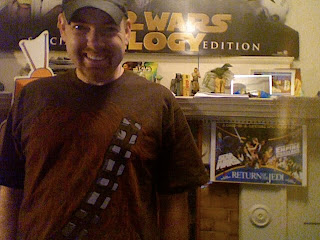 I thought this would be the perfect shirt to wear on Halloween week on the day I am making a trip. I’m hoping Washington, DC won’t be blown away like Aldreaan (http://starwars.wikia.com/wiki/Alderaan) when I arrive for the Daily Show Rally to Restore Sanity (http://www.rallytorestoresanity.com). Off to the Rally!!!

If you’d like to read up to Chewie, here’s a peak from http://starwars.wikia.com/wiki/Chewbacca:

Chewbacca (or "Chewie", as he was known by his friends) was a legendary Wookiee from Kashyyyk and co-pilot of Han Solo's ship, the Millennium Falcon. He was the son of Attichitcuk, the husband of Mallatobuck, and the father of Lumpawaroo. Chewbacca carried with him the name of an ancient Wookiee hero, the great Bacca, first of the great chieftains of Kashyyyk, and the creator of a sword that denoted leadership among the Wookiees. This name placed Chewbacca in a noble lineage, which was further supported by his role in the Battle of Kashyyyk during the Clone Wars and during the Galactic Civil War.

Chewbacca was a wise, sophisticated being of great strength and loyalty. As technologically savvy as the brightest Academy graduate, he was also a skilled mechanic. Chewbacca, like many Wookiees, was able to understand Basic, but he could not speak it due to his species's vocal structure. He instead spoke Shyriiwook, the main Wookiee language, composed largely of growls and grunts, to his non-Wookiee companions who typically replied in Basic.

He later died during the Yuuzhan Vong War.

And here's the Chewbacca song by Supernova featured in one of my favorite movies of all time, Clerks: