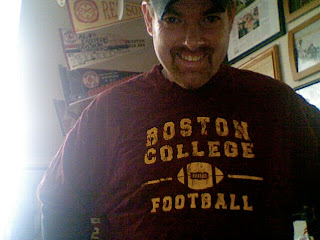 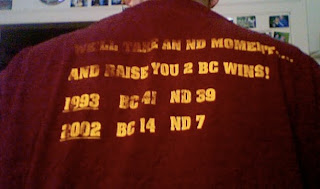 It was November 27, 1993. I was a sophomore living in Roncalli Hall at BC, and BC was playing the #1 ranked Irish in Notre Dame. We had lost my freshman year 54-7, so I was just hoping for a good game. As I watched with my roommate Patrick (I was actually running between two rooms, well aware that where I watched had an impact on the game), I couldn’t believe what I was seeing. BC was ahead 38-17 in the fourth quarter but, with my Cheering-for-Boston-Teams upbringing, I knew there was plenty of time for ND to comeback…

And comeback, they did. With just over a minute left, Notre Dame scored a touchdown that gave them a 39-38 lead. I almost laughed to myself, knowing that Patrick was getting his first taste of what rooting for a Boston team felt like. Quarterback Glenn Foley made it worse by completing four passes and making it look like the Eagles actually had a shot. In came David Gordon to attempt a 41-yard field goal that would give BC the win and destroy any hopes the #1 Irish had of a national championship run…

My prayer was simple: “Please, God, just for once, let one of the teams I root for win an important game, please, just once…”

Gordon’s kick knuckled its way through the uprights and the hearts of Notre Dame fans everywhere. I was jumping up so high, my knee almost took out Patrick’s face. The BC campus instantly exploded, and Patrick and I had no idea what to do. When we heard and saw everyone running down to lower campus, we quickly followed the screams.

Lower campus looked liked Woodstock, with a huge sea of people gathered in the parking lot outside of the stadium. Even though the team was still in Indiana, the plan was set: Stay there and party until the team got back. Patrick and I ran into some of our friends and we all questioned if it had really happened. We talked to one of the 14 Mikes who had lived in our freshman dorm who said he was having a party that night and told us to stop by. Because I was in the middle of my struggles with alcohol, I assured him we would be there with our drink on. Finally, the team showed up and the crowed was brought into frenzy as they all got off the bus. As Patrick and I walked towards our friend Mike’s dorm, I saw Terence Wiggins, a safety I had a freshman English class with. I said, “Hey Terence, great game!”, and he gave me a combination of a big smile and a “how does he freakin’ know my name?” look.

The rest of the night, I am a little fuzzy on. Patrick and I went to the party, and I drank. Then I drank some more. And I kept drinking. It was times like this that it was easier for me to rationalize my over consumption because I was surrounded by people doing the same. For some reason, I thought in my condition I would be great at playing Street Fighter on Mike’s Super Nintendo. I could hardly see the screen, but kept begging for rematch after rematch (much to the enjoyment of onlookers). This is where the fuzziness part starts...

Apparently in the middle of one of my virtual fights, the alcohol and my stomach were having a nasty fight of their own. I puked right on the floor, and Patrick “escorted me” out of the party. Much like my first time drinking, I apologized to my friend Mike all the way out the door. He was very understanding, and glad I had a bodyguard to see me back to upper campus.

Patrick watched me all the way, making sure I got back all right. This included the 200-something “Higgins staircase” that connected lower and middle campus. Patrick reports I took a few spills and “breaks” on the way up, but I was able to make it to the top. After making sure I was back in our room safely, he went back down to lower campus to continue the celebrating. I woke up in the middle of the night, not knowing what floor I was lying down on. I looked up to the wall and out of the corner of my eye, I saw my Extreme “Tragic Comic” poster. I thought, “Okay, I’m back”, and passed out again on the floor.

When I got up the next morning, Patrick filled me in on the details of the night as I got the room back in order (for some reason, I had made it look like “Hurricane Dave” had hit it – my dresser drawers were out and all of my clothes were everywhere). Even though then I didn’t realize it, I was very lucky to have Patrick watching over me during those days. I was out of control, he seemed to take everything in stride, and like my parents he never lectured me or yelled at me because of my drinking. He just wanted to make sure I was okay, and was willing to be there whenever “Dave was being Dave”.

Even though drinking took away from a wonderful night, I am glad to say I was sober throughout the whole game. I do regret missing out on some of the celebration, but that is part of the huge lesson I learned from my drinking days. It has been 15 ½ years since I drank, and 15 ½ years since I have blacked out any nights like the one when BC beat #1ND on the last play of the game. Although I have always held memory as a precious commodity, it’s nights like that of November 27, 1993 that make sure alcohol will never again play a role in what I remember.

Off to Chestnut Hill to hopefully watch BC win another one over Notre Dame, and make it an even 10-10 all-time record against them. GO EAGLES! Oh, here’s the clip from that game (that I will never get tired of watching) and for more info on the BC-ND “Holy War”, go to: http://en.wikipedia.org/wiki/Holy_War_(Boston_College_vs._Notre_Dame)