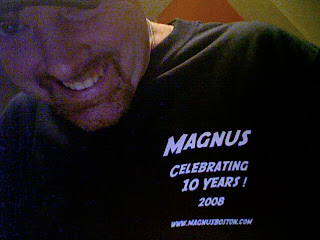 This shirt was donated from New England’s Premier Party Band themselves! They are Magnus and simply put, they rock (how can a band with two BC grads not rock?) And I’m not just saying that because I know the lead singer Collin and the bassist Bob…but I do. Every time I have gone to see one of their shows, I can tell they have come to play. They are the perfect balance of professional and fun, and I have yet to be in the middle of a crowd that was “kinda” into it.

As it says on their website (http://www.magnusboston.com), MAGNUS is one of New England's most loved and most accomplished cover bands, and one of the areas only cover bands to feature a four-part horn section, male and female lead vocals, and a full rhythm section. Established in 1997, the band has played more than sixty venues in seven states, totaling more than 350 shows. MAGNUS has played all of Boston's top club venues and New England's favorite ski venues and beach hot spots. The band has headlined Boston's City Hall Plaza, sharing the stage with national acts such as The Sugar Hill Gang, Jessica Simpson, Tavares, and Chic. MAGNUS has also served a prestigious list of corporate and private event clients at world-class venues throughout the Northeast.

MAGNUS plays great songs that everyone knows but aren't being overplayed by every other band in town - everything from AC/DC to Christina Aguilera, Lady Gaga to Lionel Richie, Joe Cocker to Journey, Bon Jovi to David Bowie, and Maroon 5 to Michael Jackson.

I saved this shirt to wear to their show tonight at Waxy O’Connors in Foxboro (http://waxys.com/foxborough/index.php), and even though it violates the “Don’t wear the t-shirt of the band you are going to see” rule, I’ll gladly make an exception for the blog. Thanks again for the t-shirt guys, see you soon!

If you want to check out their YouTube channel, it’s here: http://www.youtube.com/user/magnusboston

And here’s a video of Magnus playing at Foxboro’s Concert on The Common last summer: