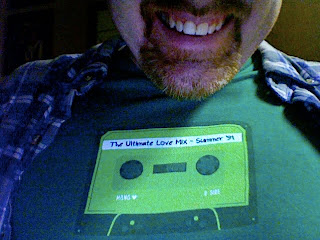 This shirt, donated from Nerdy Shirts (http://www.nerdyshirts.com, http://www.nerdyshirts.com/mix-tape-t-shirt), took me back and made me wonder what would have been the “Ultimate Love Mix” I blared out the windows as I cruised the streets in between my junior and senior years of high school. So, I looked at my tapes and googled a bit and came up with the mix. I only took songs that were released in either 1990 or 1991 and ones I remember singing along to. Some have stories, some were my favorites, and some were just really popular. Most would fall under the banner of “hair band ballads”, but others represent the end of hair metal’s success. More than once, they were all played in a red 1985 Plymouth Duster…

Honorable mentions (that couldn’t fit on a CD):

More Than Words – Extreme, I Saw Red - Warrant, I Still Think About You – Danger Danger

If you’d like a copy of “Dave’s Ultimate Love Mix – Summer ‘91, just let me know! Or let me know any songs you would have included!