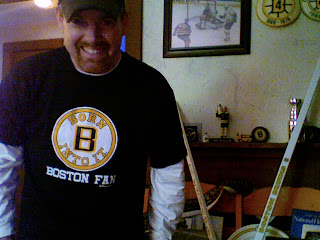 Do your parents have a “Bruins Corner” in their family room? Mine do, and it has two seats from the Garden, an autographed picture (taken by my father) of the last official goal scored at the Garden, the puck that hit my mother in the chin (see story here: http://davestshirts.blogspot.com/2010/10/t-shirt-278-ft-wausau-hockey.html), and a lot of other Bruins memorabilia collected over the years.

I’m wearing this shirt (from the first website to donate to me, http://www.chowdaheadz.com, http://www.chowdaheadz.com/born-into-it-black-and-gold-t-shirt.html, THANKS, Chowdaheadz!) today because it’s the start of another Bruins season. Even though as I write this they are behind 2-0 halfway through the game, I have been waiting for today all summer long. Hockey is my favorite sport, the Bruins are my favorite team, and every year I think “this could be the year”.

Ugh, behind 3-0 now. Why isn’t McQuaid playing? I think it’s time to break out the letter I wrote to Chara at the end of last season (from http://davestshirts.blogspot.com/2010/06/t-shirt-161-i-bleed-black-gold.html)

My name is Dave McGrath and I bleed Black and Gold. I have been a Bruins fan my whole life, and The B’s are something that are part of the glue to my family. My parents are the two biggest Bruins fans I know, and my mother is the person I turn to whenever I have a hockey-related question. At one game she took a puck to the chin (which required stitches) and refused to go to the hospital until the game was over. Her first Mother’s Day was the day #4 scored his overtime goal that gave The Bruins their fourth Stanley Cup (my older brother had been born just six days earlier).

Like their love of The Bruins, my parents taught all five of their children the value of loving one another and supporting each other through everything. This played a huge role when I was 18 and was diagnosed with a cancerous brain tumor. My family, friends, and The Bruins were a huge part in helping me get through my first few rounds of chemotherapy. My family and friends provided the love and support, and The Bruins provided a sense of normalcy (They also signed the stick pictured with me – my high school girlfriend’s brother-in-law’s father was an NHL scout and got the stick for me: I will never forget the day I was in the hospital and they brought it to me). During the start of my battle with cancer my family and I still watched every game on the edge of our seats and for those hours, cancer wasn’t on my mind. I proudly wore my “Canadiens SUCK!” shirt (http://davestshirts.blogspot.com/2010/03/t-shirt-61-canadiens-suck.html ) in the hospital, and couldn’t believe it when the B’s swept the Hated Habs in the second round. Although the Black and Gold would eventually fall to Mighty Mario and the Penguins, they provided a much needed distraction for me and my family that year. I am glad to report that my family’s support of the Bruins has since been added to with my brother’s kids, so the McGrath bloodline will continue to spill Black and Gold for another generation.

Another thing that got me through cancer was visualization. Every time I got chemo, I imagined the drugs flowing through my veins, up into my brain, and attacking the tumor. My images were pretty vicious, and I knew the cancer really didn’t have a chance. The doctors originally said I would need chemotherapy and radiation, but after my last round of chemo they said something like “We don’t know why, but you don’t need radiation.” – No argument from me. I have been cancer free now for over 17 years, and am lucky enough to have a job that lets me work with cancer patients in treatment (I work at American Cancer Society’s Hope Lodge in Worcester). One thing cancer helped teach me was that the most important thing in life is the people you have in yours. I really, really, really want to see The Bruins win The Cup, but I wouldn’t trade my family and friends for any number of consecutive Bruins Stanley Cup Championships.

As I was watching The Blackhawks lift The Cup over their heads last night, I was thinking of my family and the amount of joyful tears that we would share if we got to see you do that, Zdeno…I almost cry just thinking of it. Were you watching it, Z? Can you imagine what it would be like? I assure you if you want it, imagine it, and believe it, it will happen. You and the B’s are a constant source of inspiration and joy for me and my family, and for that I thank you. We are all now counting the days until October, and I wish you the best in the coming season.

Always to Bleed Black and Gold,

Here’s to a great Bruins season and bringing the Stanley Cup back to Boston!