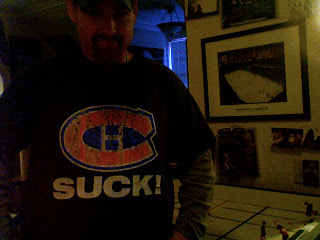 Although this may be funny or sad or cool or amazing, I have had this shirt for more than half of my life. In case you don’t follow The Bruins, I am wearing it because they are playing the “Hated Habs” tonight…the biggest rivalry in hockey.

One of my first memories of this rivalry was in 1987 when I was at a friend’s (I think it was Adam’s) Bar Mitzvah. The Bruins were behind 3 games to none to The Canadiens, so if they lost that was the end of the series. I remember my friend Billy calling his parents on a payphone to check up on the score. The B’s had lost, and they were swept out of the playoffs. The next year they did beat Montreal in the playoffs, the fist time since 1943.

Two of my favorite memories of the B’s-Habs showdowns happened in the early 90s. In 1990, I went with my dad to game 2 of the playoff series between The Bruins and Canadiens. The Bruins trailed throughout the game, and Cam Neely scored in the third period to send the game into overtime. In OT my father noticed one of his least favorite players, Garry Galley, was on the ice. “Jeez, WHY do they have GALLEY out there????”, he moaned. About 10 seconds later, “Ga-Ga” took a pass from Craig Janney and put the puck behind Patrick Roy. The “Ghaden” erupted, and I think I told my dad “That’s why!”. It was one of the best games I have ever attended. The Bruins went on to win the series, but eventually lost in the Stanley Cup Finals (thanks Messier and Ranford).

Two years later, while I was in the middle of my chemotherapy, The Bruins faced the Habs again. Not only did they beat them, this time they SWEPT them. And yes, I was wearing this same shirt when I was in the hospital.