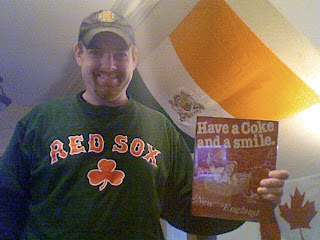 Since this is my first of many Red Sox shirts, I will start with my first Red Sox story. I was six when I went to my first game at Fenway. I am glad my father had the rule of not taking us to a game until we were six (so we actually could remember the experience). Before the game, a park employee approached me and asked if I wanted to be the “Coca-Cola Kid” that day. I had no idea what he was talking about, so I asked my dad if he knew. Looking at the picture of me with all of my huge buttons, I think he may have picked me because he thought I was “special”. My dad told the guy yes, and during the game, they took me and my father up to the announcer’s booth (back then I guess it was okay to leave my ten-year-old brother by himself). They gave me a bunch of Coke stuff including a shirt (same one in the picture that I have framed) and a Coke bottle radio. They also took my picture and put it up on the scoreboard in centerfield (which was black and white back then, but you could still tell it was me!). My favorite part by far was when they let me control the balls, strikes, and outs lights on the Green Monster. I remember Jim Rice looking back to see what the count was and thinking “I put that light on!” There was also one pitch that the guys in the booth argued over if it was a ball or strike…I got the call right. The funny part of this story is when my dad and I returned to the seats and saw my brother. Somehow without any money, he had managed to get himself an ice cream. The guy in the row behind had spilled his beer on him during an exciting play and felt bad, so he bought him the treat. Yaz hit a homerun, and the Red Sox won the game. I really had no choice from the very beginning: I was a die-hard fan.