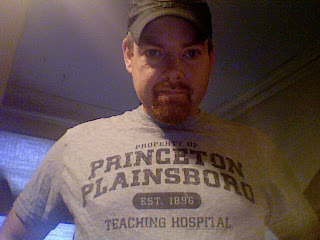 Even though it is a repeat tonight, I am wearing this today for two reasons: One, House is on tonight. And two, I think I am coming down with something…only two symptoms though (tired and achy), so I don’t think House could help me. Like a lot of people, I was amazed when I found out Hugh Laurie wasn’t American. Thanks to my mom for telling me to check out this show… (http://www.imdb.com/title/tt0412142/)

For those of you that watch it, here’s some trivia (taken from imdb.com):

During Hugh Laurie's audition, producer David Shore told how Bryan Singer, one of the executive producers, said, "See, this is what I want; an American guy." Singer was completely unaware of the fact that Hugh Laurie is British.

Dr. Gregory House was based on Sherlock Holmes... but Holmes, in turn, was based on a Doctor that Sir Arthur Conan Doyle knew while studying medicine, a Dr. Bell, whose specialty was diagnosis.

From a promo picture for the show's fourth season, it was discovered that Dr. Wilson received his undergraduate degree from McGill University in Montreal, QC. He'd been seen previously wearing a McGill sweater. He also received a degree from Columbia University's "School of Oncolgy" [sic].

In the episode where Wilson moves in with House (Season 2), House's Tivo list is shown. One of the saved programs is "Blackadder II" (1986), featuring Hugh Laurie

Omar Epps' character, Eric Foreman, shares a name with the lead character on "That '70s Show" (1998), played by Topher Grace

TV satirist Stephen Colbert has several pictures of 'enemies' on the mantle-piece of his show's set; one of these of is Hugh Laurie, due to both Laurie's show winning an Emmy over Colbert's, and because Laurie received an OBE while Colbert did not. In an episode in the middle of House's fifth season, a picture of Colbert can be seen on House's desk.

In several episodes, House is show at home and his address 221B, a tribute to Sherlock Holmes famous London address, 221B Baker Street.