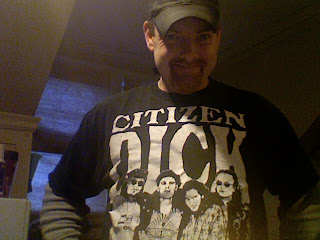 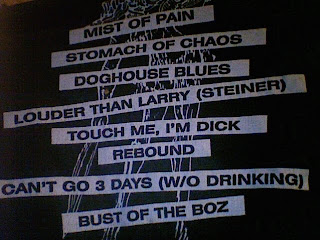 I got this shirt a while back at Tower Records on Newbury Street in Boston. It is a reference to a made-up band for the movie Singles, which had one of the best soundtracks ever put together:

I wore it today because they just announced Pearl Jam will be playing in Boston on May 17th. Pearl Jam is not only on the Singles soundtrack, they are in the movie as part of Citizen Dick:

One of my favorite parts of the movie is an interview with the lead singer of Citizen Dick (played by Matt Dillon). I couldn’t find it on Youtube, but here is the text:

Club Interviewer: Talking here with Cliff Poncier. Cliff, any comments on the "Seattle Sound" and Citizen Dick's place in it?

Cliff Poncier: Well, I don't like to reduce us to just being part of the "Seattle Sound." I'd like to think of us as expanding more. Like, we're huge in Europe right now. I mean, we've got records... uh, a big record just broke in Belgium.

Cliff Poncier: Well, I think "Touch Me, I'm Dick," in essence, speaks for itself, you know. I think that, you know, that's basically what the song is, um... about... is about, you know... I-I think a lot of people might think it's actually about, you know,"My name is Dick, and, you know, you can touch me," but, I think, you know, it can be seen either way.

If you have ever wondered why Nirvana wasn’t included as part of this Seattle-based-grunge movie, I just found this: