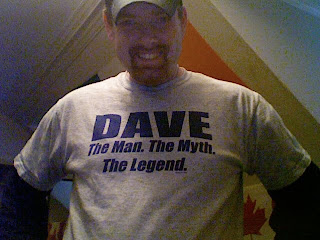 I’m 99% sure this is another one from my Aunt Carol. I thought this would make my friend Carl chuckle, and it did…he also couldn’t believe I wore it to the diner. I will leave it up to the masses to argue the validity of the shirt’s statement. Here are some famous Daves (or Davids), or at least Daves I could think of: (who am I missing?)

Dave Hayes (David Michael Hayes, my grandfather who I was named after)

And, of course, the six Daves/Davids that were all in the same 6th Grade class: Bouffard, Fox, Noble, McGrath, Sullivan, Tufts

My cousin Matt just sent me a link to this song that goes well with this blog: Thanks, Matt!


The Daves I Know