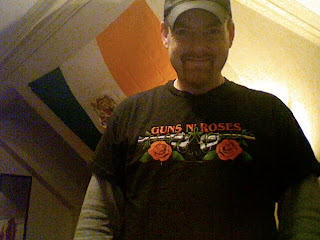 Although it’s hard to believe, Appetite for Destruction is almost 23 years old. Not hard to believe is that Appetite still rocks. This t-shirt was a Target special, and I wore it to see if any of my Wednesday guitar-jamming students have actually heard of GnR (or G-en-Aaah as many Bostonians might say). Both of them had heard of Guns N’ Roses, but said they had never heard of the song “Patience”. So, that was today’s lesson. It went well.

One of the first songs I learned how to play, it always reminds me of one of the many “Around the World” parties we had at 32 South Street my sophomore year of college. My friend Andy played it, and there were hundreds of undergrads singing along at the top of their lungs…and it was one of the nights my drinking didn’t get me into trouble!

GnR also reminds me of my older brother. I remember the day he let me borrow Appetite for Destruction (which he had bought on the day it came out…a fan long before they were “huge”). He came into my room, handed it to me, and said, “Don’t play this too loud if Mom is home.” (Although not rare now, it was the first album I had ever listened to that contained certain words) Also, when I was in the hospital for my Crohn’s he gave me a copy of G N’ R Lies, which is the EP that has “Patience”. I listened to it often (on my Walkman!) as I healed from my surgery.

Even though Guns N’ Roses is still “back” and Chinese Democracy was surprisingly good, nothing will compare to the original lineup. And seriously, Axl Rose releasing CDs and touring under the name Guns N’ Roses would be like Paul McCartney doing the same thing and saying it was The Beatles. It’s a shame those original GnR boys couldn’t just get along. Damn egos…