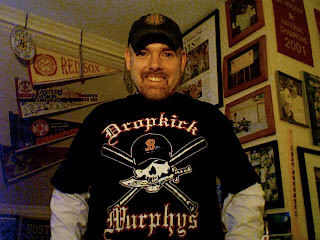 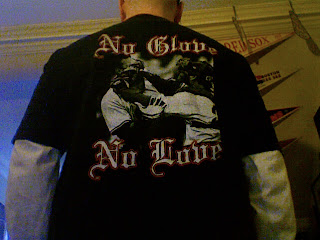 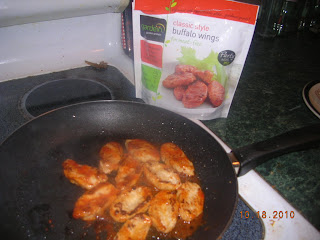 Today is my brother Tom’s birthday, so I thought this would be an appropriate shirt to wear. Although Tom isn’t a huge Dropkick fan (that I know of), he is a huge Red Sox fan and it was on this day in 2004 that the Red Sox beat the Yankees in the playoffs TWICE! Game 4 of the ALCS actually started on October 17th, but it was the 18th by the time Big Papi hit his 2-run walk-off homerun in the bottom of the 12th. Papi did it again on October 18th with another game-winning hit. This one came in the bottom of the 14th inning, a mere 5 hours and 49 minutes after the game started at 5:11 PM (according to http://www.baseball-reference.com/boxes/BOS/BOS200410180.shtml). Luckily, the Sox had received my letter requesting they win twice for Tom on his birthday…

The picture from the back of the shirt is from the Sox-Yanks game on July 24th of that year. According to ESPN (http://scores.espn.go.com/mlb/recap?gameId=240724102),

The Red Sox were trailing 3-0 and hitless before Bronson Arroyo plunked Rodriguez, prompting the AL MVP to stare at the mound as he moved slowly toward first. Varitek positioned himself in front of Rodriguez and the two began jawing before Varitek, still wearing his mask, pushed the Yankees star in the face.

The dugouts and bullpens emptied.

"I told him, in choice words, to get to first base," Varitek said. "And then it changed from him yelling at Bronson to [us] yelling at each other, and then things got out of hand."

I would love to know what those “choice words” were!

But our love of the Red Sox is not the only thing Tom and I share. For most of our lives growing up, Tom and I shared a room. We had a lot of toys, usually a huge mess, and slept on bunk beds (for bunk bed stories, please see: http://davestshirts.blogspot.com/2010/09/t-shirt-247-i-like-it-on-top.html ). I remember some nights, I had to look at the floor of our room and plan where I was going to walk to the bed before I shut off the light. When we were called on to clean our room, we became masters of hiding everything either under the bed or in the closet. This always made “finding things” an adventure or very exciting when things we thought were lost would show up years later. Although when I was younger I envied my friends who had their own rooms, I’m glad I had the experience of sharing a bedroom when I was a kid. It certainly left me well prepared for college, and gave me an appreciation for space and sharing.

Even though Tom and I shared quite a bit growing up, we do have our share of differences now. Tom has been a vegan for a long time now, something I think I will never be. But, in honor of his birthday and dietary choices, I made my first vegan buffalo wings today. I must say, they were very tasty! I am still waiting on the verdict from my Crohn’s, but so far so good! Tom also isn’t as technologically savvy as I am. He doesn’t own a microwave, thinks my EZ-Pass is too “big brother”, got his first cell phone a couple of years ago, and sent me a forward via email for the first time a couple of WEEKS ago. But, that’s why I love Tom. He lives simply and is one of the smartest people that I know. He reads, recycles, and has a job that involves problem solving for transportation (see: http://www.uvm.edu/~transctr/?Page=about_default.html&SM=_aboutmenu.html). He knows sports, politics, and how to make me laugh my ass off every time I hang out with him.

So, here’s to you Tom…hope you’re birthday was a very happy one! Thanks for making me proud to tell people you are my younger brother…I love you!