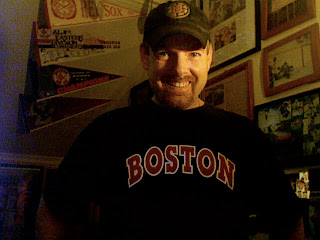 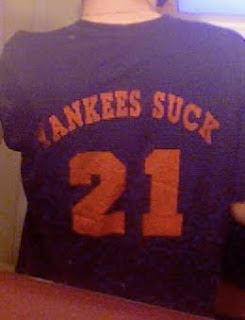 This was the first YANKEES SUCK shirt I ever bought. While heading back from breakfast in Southie with my roommates Patrick and Amy, we were driving on the Mass Pike. I had always wanted a YANKEES SUCK shirt, and Amy was explaining to me where she has seen someone selling them. As we passed Fenway, she pointed up to the overpass near the Cask n’ Flagon, and exclaimed, “There he is!” I immediately exited The Pike at my first chance, and we backtracked our way to Fenway. I was so excited; the vendor could have told me they were $50 each. I think it was $15, which I gladly handed over so I could hold my newest favorite shirt. As you can see from the fading on the back, I’ve worn it a few times since (Oh yeah, I think the 21 is a reference to Clemens, who had recently gone to the Evil Empire).

I wore it today because the Sox play the Yankees tonight in the last regular season series. Even though the games mean nothing to the home team, it will play a role in determining if the Yanks are the division winners or the wild card team.

And, like I’ve said before, it doesn’t matter what place they are in or how many championships they have won: The YANKEES SUCK.

But, I will not spread hate today. There are a few Yankees players that get a pass from me (Paul O’Neill and A-Rod are NOT among them)

The Babe – can you name another player to hold both hitting and pitching records?

Lou Gehrig – I actually did reports on both Ruth and Gehrig in elementary school (what can I say, there was no Ted Williams book in our school library!)

Bernie Williams – Even though he always seemed to kill the Sox, he was just a great player and didn’t have the usual “I’m a Yankee A-hole” air about him

This one is tough, but Derek Jeter – I yell at him and can’t stand whenever he jackknifes away from a pitch anywhere near inside, but the man is a great baseball player and gives it his all every game. Don’t get me wrong, I hate him, but it’s more because of the uniform that he’s wearing than the way he plays (see O’Neill, A-Rod). Jeter is to the Yankees as Ray Bourque was to the Bruins. The only difference is the Yankees owners gave Jeter teams that were good enough to win championships. Without a doubt, he would have been a fan favorite at Fenway had he ended up in Boston instead of New York.

Either way, the Yankees still suck, and I hope they lose in the playoffs!