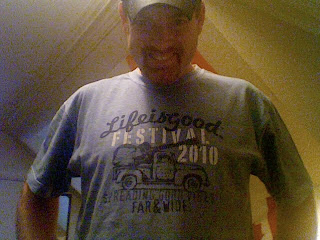 I wore it today because earlier the History Channel reminded me that the world can always use “Good vibes spread far and wide”. I often think about how easy it would be for everyone to get along if people traded their hate in for empathy and their greed in for charity. And just when I believe in the possibility of a much better earth, I see shows on the history channel like the one I saw this morning. It was part of their Gangland series (www.history.com/shows/gangland) , and was about the Imperial Klans of America.

I shook my head as member after member said they were preparing for a “race war” and how they believed in ZOG (which stands for Zionist Occupation Government), which is an antisemitic conspiracy theory stating Jews secretly control the government. I just don’t understand how someone can believe hatred and separation are the answer. The show also talked about how the internet is helping to spread these ideas and recruit members, so I had to check them out. Although the IKA site (www.kkkk.net/page1.htm) seemed out of date (last “news” was from 2006), I also found the “regular” Ku Kulx Klan website (www.kkk.com, www.kkk.bz ). The KKK page actually has a link for t-shirts (www.christianbooksandthings.net/cbtees5.htm).

Like other groups, what I don’t understand the most is how these groups claim to be Christian. I was raised Catholic, and I read the Bible enough to know that 1) Jesus would want all races to get along 2) Jesus would not want people preparing for a “race war” or any kind of war 3) Jesus wouldn’t join the KKK if he were here today. How many of these so-called “Christian” groups actually think they are carrying on Jesus’ work? The Catholic anti-gay-unless-you’re-a-pedophile-priest-and-we’ll-transfer-you and women not equal to men practices and beliefs are the reasons I stopped going to Mass. It’s not something I believe in, and not something I think Jesus would approve of. I don’t even know if Jesus was God, I just know he would be helping most of the groups that so-called Christian groups are against.

I understand why so many people in the world are angry and upset. The economy sucks and the division between the rich and the poor gets greater every year. It’s easy to blame someone for all the problems, and it feels good when you are part of a group that thinks the same way you do. You feel like they protect you, they will be there for you no matter what, and you’re all in this together.

We are all in it together. But that “we” needs to mean people. It needs to mean every human. It needs to mean planet earth. Dividing, spreading hate, and preparing for war are not the direction we need to go. Like I’ve written before, it all comes own to the golden rule, which is contained in just about every major religion. Treat others as you would want to be treated. If we all do that, everything’s good…