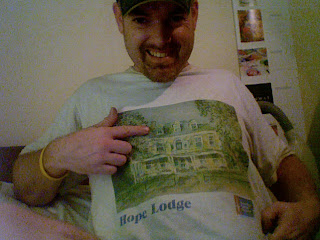 As some of you know, four years ago my life was in the middle of a downward spiral. I had no job, legal issues, and lots of time to dwell on both. I only ventured outside of my room when my body needed me to, and I rarely left my apartment. When I did leave my apartment it was usually just across the hall to watch a movie and then I’d return to my bedroom cave when it was done. I wasn’t answering my phone and, depending on the day, sometimes didn’t get back to people when they left me a message. Even a trip up to Prince Edward Island did not cheer me up. Life was not good.

My parents and older sister showed up one day for something of a mini-intervention. They knew I was hurting and wanted to reassure that they were there for me, wondering when I was going to come out of the dark shell I had created. I told them I would be okay, but really had no idea how things were going to get better. I feared the upcoming holiday season, knowing that if I couldn’t be happy that time of year, things most likely wouldn’t improve in the new year.

Thanksgiving ended up being a turning point for me that year. Being surrounded by my family reminded me how lucky I really was. No job or amount of money could ever replace the loving people I had in my life. I started smiling more, laughing more, and spending less time alone. But as Christmas passed and another year started, I also started running out of money.

It was around this time that I was introduced to The Secret. I know a lot of people think it’s B.S., but it really made sense to me (and still does). The basic premise of The Secret is that the whole universe runs by the law of attraction. So if you project negativity, you will attract negative things (think of a day that starts off bad and keeps getting worse). Alternatively, if you think and feel positive things, you will attract more positive things into your life. Although I didn’t know it at the time, I used The Secret to beat cancer. I thought it, visualized it, believed it, and beat it. It’s pretty simple. Being thankful for what you have and being positive will make your life easier. (I would compare it all to The Force, but that’s for another blog.)

Even with my emotional turnaround, I was still without a job. Over the years I had always wanted to do something related to cancer, but never did more than a couple of survivor’s laps at the Westboro Relay for Life. I had told my self “you should checkout the American Cancer Society to see if they have any jobs”, but it was just a thought that went in and out of my head without making any sort of effort. Then one day, something put that thought in my head again. This time I acted on it, and went to the ACS website. The job at Hope Lodge had been listed only days earlier, and thought maybe I had found something.

I quickly changed my resume and added “cancer survivor” to the top of my qualifications. After applying and meeting my boss for my first interview, I knew I had found something. I have been working at Hope Lodge (http://www5.cancer.org/docroot/subsite/hopelodge/MA_Worcester/wr_index.asp) for over three years now, and I am one of those lucky people who can say that he loves his job. Hope Lodge not only helped me continue to get my life back where I wanted it to be, it gave me a reason why I had cancer in the first place. Cancer saved my life, and Hope Lodge made it possible.

PS- I am pointing to the window of my apartment that appears on the shirt…does anyone else have a t-shirt with a picture of their apartment on it?