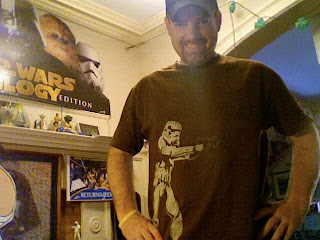 http://davestshirts.blogspot.com/2010/05/t-shirt-122-titanic-swim-club.html, was a gift from my awesome boss.

I was telling someone about a principal I worked with one year. I was working with a student population that I had no experience with (Down Syndrome and Autistic), but this principal expected me to be an expert (did she ever look at my resume?). She was quick to let me know what I did wrong, and never uttered a “nice job” if I did something well. One time we were in an IEP meeting and we could hear a student screaming in the other end of the school. Someone ducked their heads into our meeting to tell us it was one of my students. I went to where he was, and quickly told him everything was going to be okay and asked him if he wanted to play Connect Four. I know it may be hard to understand that playing me in a game could solve problems, but it worked. When I returned to the meeting, the principal asked me what I did. I explained it to her fully knowing that if there was going to be any time for her to compliment me, this was it. Nothing. Just an “Oh”, and refocusing back to the meeting.

A couple of months later, my Crohn’s started acting up (well, backing up is more like it), and I went to see my doctor. He explained to me that the place where my intestines were reattached after my surgery (1 ½ feet of small and large intestines removed) had a chance of scarring up and constricting my small intestine. He thought there was a back-up that was causing my symptoms, but wanted to get a scan of it to get a better look. I went back to work and explained to the principal that I needed another appointment and the doctor said (which he did) there was a chance I would need more surgery. Her response: “I’ve never heard of anyone needing surgery for Crohn’s”. Although many, many, many things popped into my head as a response, I just nodded and told her that’s what he told me.

The boss I have now is pretty much the exact opposite of this principal. She supports my work at Hope Lodge, and she supports my crazy t-shirt obsession. She is the first to tell me I am doing a good job and constructively criticizes with a heart of gold. Working here is rewarding enough, but having a boss like mine makes it a blessing…