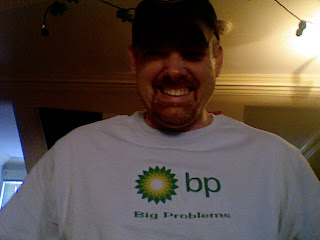 This shirt, like a previous one (http://davestshirts.blogspot.com/2010/06/t-shirt-176-i-just-got-laid.html), was donated from Crazy Dave’s T-shirts (www.crazydavestshirts.com). Thanks again, Dave!

So, what can I say about bp? They do have big problems. I said a lot of what I wanted to say here (http://davestshirts.blogspot.com/2010/06/t-shirt-179-pelican.html), but this is what I know:

I am still seeing people in Worcester getting their gas at bp stations.

I have blogged about 83 shirts since the spill started.

The real solution is to not depend on oil anymore.

Even though it is a huge mess in the Gulf and the lives of many people and animals have been affected, the 11 people who died and those they left behind should not be forgotten…

Shane Roshto was 22 years old and came from Mississippi. He leaves behind a son and his wife Natalie.

Roy Wyatt Kemp was 27 years old leaves behind his wife Tracy and 2 daughters.

Kart Kleppinger -leaves behind his wife Tracy and a 17 yr old son, he was a Desert Storm veteran.

Jason Anderson-35 yrs old leaves behind his wife Shelley and a daughter and a son.

Stephen Curtis of Louisiana had 17 years in the oil industry leaves behind his wife Nancy and a daughter.

Dewey Revette 48 from Mississippi had 29 years with Transocean leaves behind his wife Sherri and 2 daughters.

Adam Weise 24 yrs old, from Texas leaves behind his girlfriend and family.

Gordon Jones 28 yrs old leaves behind his wife Michelle expecting a baby and a son.

Aaron Dale Burkeen 37 years old from Mississippi leaves behind his wife and 2 children.

Blair Manuel- 56 years old from Louisiana survived by his fiance Melinda and 3 daughters.

It took me a while to find this list, and you can see their pictures here: (www.politicolnews.com/i-want-my-life-back).