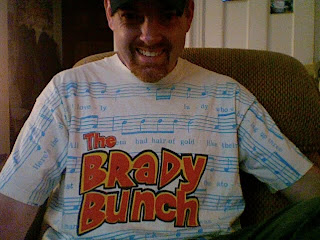 I’ve had this one for a while, at least I’m pretty sure (do to my dad’s picture taking) that I wore it when I moved into Roncalli Hall. I also think I ordered it from my favorite catalog growing up (see website: www.thingsyouneverknew.com).

Even though The Brady Bunch’s last season ended the year I was born, it still was a big part of my TV viewing in the early 80’s. I would watch it with my brothers and sisters on channel 56 (UHF dial) right before dinner. We came up with “The Brady Bunch Game” which consisted simply of seeing who could name which episode it was first. Although I may not have won the most, I did set the record for quickest win when I screamed “The one where Marcia likes the dentist!” after seeing Marcia riding her bike towards the house for about 2.7 seconds. You can see the opening song and the start of the episode (titled “Love and The Older Man” here:

After searching online, I also found these Brady gems:

And some Brady Bloopers:

Some “Oh my God WHAT was that episode about?” titles I found (I swear I am not making these up!):

Season 4, Episode 85: (mentioned above) “Love and The Older Man”

Life would be nice if it was more like sit-com world of The Brady Bunch. Problems may come, but things always work out in the end. Being surrounded by a loving family that sticks together makes things easier. In a way, my family reminds me of the Brady Bunch (just missing one “middle sister”), but with more serious issues. Instead of facing lost voices on Christmas morning, a bully named Buddy Hinton, a rival quarterback stealing plays, and a cursed Tiki, we faced things like Asthma, unchained German Shepherds, Juvenile Diabetes, Crohn’s, and cancer. But, we stuck together and we made it through all of them. If there’s anything better than having people in your life who love you no matter what, I’ve yet to find it…