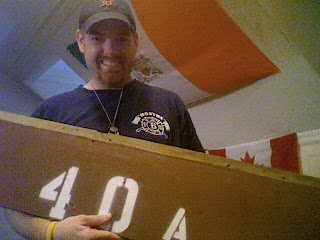 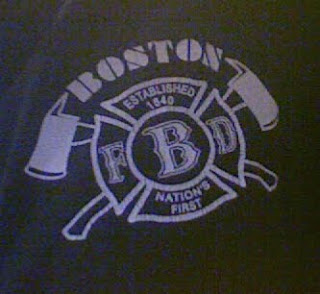 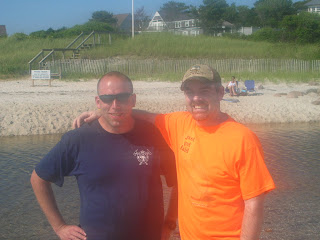 Like my first BFD shirt (http://davestshirts.blogspot.com/2010/03/t-shirt-66-boston-fire-department.html), this shirt was given to me. Years ago, my friend Drew visited a Boston firehouse and got this shirt for me…thanks, Drew! Sooooo many “Drew Stories” to choose from, but I’ll start with the sign…

Unless you went to BC, you might be wondering what I am holding in my hands. It is the front board from the on campus apartment Drew and I (and 4+ other guys…Patrick pretty much did too) lived in our senior year. The Mods were intended to be temporary when they were built in 1970, but became the “in” place to live senior year. After three years of “not-so-in” housing, I finally hit the jackpot when I landed at 40A. Years after graduation, when the news came that they were tearing our Mod down to make room for a new building, we knew something had to be done. Enter Drew wearing a hard hat and coveralls, holding a crow bar. In the middle of construction and acting like he was supposed to be there, Drew wandered over to Mod 40A, removed the board, and quietly exited the premises. I really couldn’t believe my eyes when he walked into the Waltham apartment with it. We owned part of our senior year, and part of our college.

Although in and after college Drew got into his share of mischief, he also took care of me and was witness to a few of my worst drinking nights. One night in particular, he happened to be the EMT driving the ambulance that picked me up (I was passed out on the sidewalk). According to Drew, it took several Boston College Police Officers to “assist” me getting into the ambulance. Once in, Drew was in the back with me and it became somewhat of a shouting match between us (I guess I wasn’t too happy to be going to the hospital). I was screaming and swearing so much that Drew was having difficulty giving a status update over the radio. The best line of the night came from Drew’s EMT partner who had taken over the driving. He was wondering what the hell was going on with me and Drew tried to reassure him everything was going to be akay by saying something like “It’s cool, he’s my friend.” The driver’s respose: “Yeah, well your friend is an asshole.” Yes. Yes, I was. But I was a lucky asshole to have Drew taking care of me…thanks, buddy.

Luckily, not all of my drinking nights involved an ambulance. One Friday afternoon sophomore year, I asked Drew what he was doing that night. He said “I dunno”, and we quickly schemed and tried to throw a last minute party together. Drew lived at 30 South Street, which would end up heading many scenes in the “Tragic Comic” screenplay. A few hours later, Drew was getting money out of the ATM at BC so he could fund the party we were hoping “enough” people would show up to. While waiting in line, he overheard one guy asking another, “Hey, did you hear? Huge party at 30 South Street tonight.” This was before email, cellphones, IMs, and Facebook, people, and it ended up being a classic bash.

Drew worked as much as he partied. He amazingly paid his own way through Boston College, a feat I doubt many of the other 2000something students we graduated with could claim. Sometimes senior year he had dicciculty getting up for his early hospital shifts, and I would be the one who would shit off the alarm. He mistakenly told me that if he was late for work again, he thought they might fire him. The next morning the alarm wasn’t doing the trick. I yelled, I shook, and I yelled some more, but he wasn’t waking up. So, I grabbed a cup of water and splashed it on his face (I didn’t want him getting fired!). Although it took Drew a while to forgive me, I am glad we can laugh about this “wet-wakeup” now.

About a month ago, Drew made a trip to Mass and I met him on The Cape. Like we always do, we reminissed and retold these and other stories, laughing along the way. I assured Drew they would all be in a book someday and if he was lucky I might give him veto power over some of them (like when he was caught impersonating a BC cop…woops!). Like I’ve said again and again, the only thing in life that really matters is the people that you have in yours…I’m very lucky to have Drew in mine, and looking forward to the next time we can share some of our stories with others.