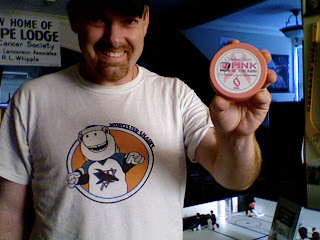 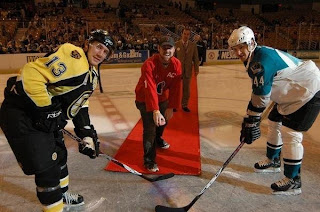 This shirt was free from the Sharks and is a good out-in-the-Sun/workout shirt.

When I started working at Hope Lodge three years ago, one of the first things I did was call the Worcester Sharks to see if they would donate some tickets to the guests here. The first time I talked to Mike Myers (Director of Community Relations), he told me the Sharks would be happy to give free tickets to any game for anyone staying at Hope Lodge. I was thrilled when he said those words and could not believe that part of my job might involve going to hockey games for free.

One of the first Sharks home games that season was a cancer awareness game called “Pink at the Rink”, and Hope Lodge was a big part of it. I got to drop the ceremonial first (and pink) puck, a moment captured perfectly by my dad (who was the official Hope Lodge photographer for the event and walked out onto the rink like he had done it 1,000 times). The Sharks goalie (Thomas Griess, who now plays for the San Jose Sharks and who played for Team Germany these past Olympics) started wearing a pink goalie mask, which would later be auctioned off and give Hope Lodge around $5,000.

A couple of months later, we had a 17-year-old staying with us. I told him about the free Sharks tickets, but unfortunately the team had only away games the week he was here. When I told Mike Myers this, he set up a time when both he and one of the players came to Hope Lodge to visit the guest. The article I wrote about it is here: http://ism3.infinityprosports.com/ismdata/2006080401/std-sitebuilder/sites/200601/www/en/news/onthebeat/index.html?article_id=8262

So as I continue to count down towards another hockey season, I am looking forward to continuing the great relationship between Hope Lodge and the Sharks. They have been an important part of helping guests get through the most difficult part of their lives. Thanks, Sharks!