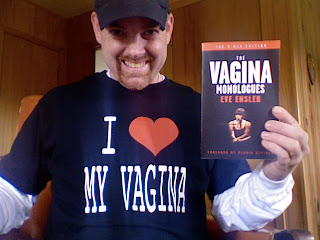 This shirt, another of many donated to me by someone awesome and supportive (thanks JB!), was made as a fundraiser for the Vagina Monologues, and the money made from it was used towards a local domestic violence shelter. If you’ve never heard of it, The Vagina Monologues is a play that was written by Eve Ensler (see book version in picture) based on her interviews with women and tells many vagina-related stories. Originally performed by Eve Ensler, it was later performed by celebrities and now has been translated into many languages and performed all over the world.

The show led to the V-Day movement (www.vday.org/home), whose goal is to end violence against women worldwide. If you don’t think it’s a problem, just look at these statistics:

• According to a report in the American Journal of Industrial Medicine, 28 % of US female veterans reported sexual assault during their careers, with consistent rates found across eras (Women's eNews, 3/30/03).

• Nearly 20% of women in New Hampshire say they have been raped. (NH Coalition Against Domestic and Sexual Violence, University of New Hampshire, and state authorities, 2007)

• In a survey in South Africa, 25% of the young men admitted to having had sex with a woman without her consent, before he was 18 years of age (Human Rights Watch).

• In the late nineties in South Africa, 40% of reported rapes and attempted rapes targeted girls younger than 17 years of age. (Human Rights Watch)

• In a survey of women in Seattle's Puget Sound area, 11 percent said they had been raped by their partners. (Group Health Center for Health Studies, Harborview Injury Prevention and Research Center and the University of Washington. Reported in Seattle Times, May 16, 2006)

• In Seoul, Korea, 22% of adult women said they had been the victims of rape and attempted rape (UNIFEM, www.stopvaw.org).

• In Colorado, 24% (1 in 4) of women and 6% (1 in 17) of men have experienced a completed or attempted sexual assault. This equates to over 11,000 women and men each year experiencing a sexual assault in Colorado. In 1997, there were 1,794 rapes reported to Colorado law enforcement. If compared to the 1998 Statewide Survey, these reports constitute only 16% of sexual assaults. (Sexual Assault in Colorado: Results of a 1998 Statewide Survey. 1998. Colorado Department of Public Health and Environment and Colorado Coalition Against Sexual Assault)

• One in six American women has been the victim of an attempted or completed rape, and 10% of sexual assault victims are men. (2004 National Crime Victimization Survey)

• In a 1995 study by the U.S. Centers for Disease control of 5,000 students at over 100 colleges, 20% of female college students or one in five answered “yes” to the question “In your lifetime have you been forced to submit to sexual intercourse against your will?” (Douglas, K. A. et al. (1997). Results from the 1995 national college health risk behavior survey. Journal of American College Health, 46, 55-66.)

A 1993 study in Alexandria, Egypt, found that 47% of female homicides were ‘honor' killings of the victim after she had been raped. (El Youssef New Presses, Cairo)

And if you think this is something that only affects women, you should read some of these stories: www.vday.org/meet-vday/v-men.

Finally, here is a two-part interview with Eve Ensler:

Although this has been mostly a serious blog (other than seeing me wearing this shirt), I will end by sharing my funny vagina-related story. It was last Christmas and my siblings, cousins, and close friends were gathered at my brothers for his usual “Christmas Cartoon Party”. My sister Megan took out a pad of Mad Libs to do in between The Grinch and Charlie Brown (or whatever had been voted in). It was my younger nephews turn, and he had to think of a plural noun. As he pondered and said “uh, um, uh”, my sister said, “Just say the first thing that comes to your mind.” He then blurted out, “Vaginas!” I actually started to cry I was laughing so hard.

I’m off to see Great Big Sea, I hope people like the shirt!