T-shirt #354: Smile if you love someone with Crohn's Disease 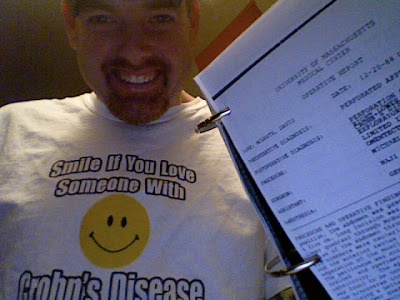 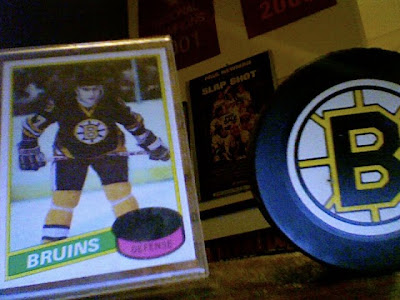 It was 22 years ago today (you can see on the page I opened to in my medical record binder). I was having pain on my right side that was so intense I couldn’t stand up straight. I had been having symptoms for a while, but at 14, I guess I didn’t want anyone to think I was a “wimp”. After one doctor visit, I was still lying down and not able to eat much. My neighbor, Dr. Thomas (a.k.a. Dr. Bob), came up for a much needed 2nd opinion. After examining me, he thought my appendix was about to burst and said I should go to the ER that night. So, on December 20, 1988, my parents took me to the emergency room at UMass…

My side seemed to hurt more with each bump we went over on the ride to the hospital. Thanks to Dr. Bob’s assurance that the surgery was a “routine one”, I wasn’t scared. I really just wanted the pain to stop. I toughed it out for the Westboro to Worcester trek, and we made it to UMass.

The last thing I remember was the nurse putting something into my IV and asking if that’s what was going to make me go to sleep. It did, but what was supposed to be a 45-minute appendectomy turned out to be a lot more. In the middle of the surgery the doctors let my parents know it wasn’t my appendix, and would end up working on me for over 4 hours. The surgeons found holes in my bowels and removed 1 ½ feet of my small and large intestines. Although I wouldn’t get an official diagnosis until after I woke up, they had discovered my Crohn’s Disease.

I remember waking up after my surgery and seeing my parents who had been waiting for me. I couldn’t talk because there was a tube down my throat, but I successfully mimed to my mother for her to put the head of my bed up. Later, a priest from St. Luke’s arrived to see how I was doing. I immediately grabbed my religious medals (which had been taped to my wrists), and he performed the anointing of the sick on me.

My parents finally got to go home and let the rest of the family know what was going on (this was long before cell phones). When my mother told my sister Carolyn what was going on, her choice of words put some fear into my sister. She told her “Dave’s probably not going to make it home for Christmas”, but Carolyn was holding her breath after hearing “Dave’s not going to make it…”.

I don’t remember much of the next day. I was in the intensive care unit and remember seeing the Bruins game out of the corner of my eye at one point (they beat the Whalers 4-3: http://www.hockeyfights.com/teams/3/schedule/reg1989). Yes, I was too out of it to even watch hockey!

When I was ready for company, my whole family came to visit me and surrounded me with love and humor. I remember the stitches from my surgery hurting a lot when my brother Jon made me laugh – he made some joke about the doctors taking out my intestines and wondering how many farts had passed through them. I whispered to my mom about the kid across from me who was always whining about how much pain he was in. She looked at him and said, “Well he must not be a “Bruin” like you are…”. My younger sister Megan was concerned about what Santa was going to do on Christmas Eve – would he bring my presents to the hospital or the house? My aunt and uncle also stopped by to say hello, and left me a copy of Hoosiers to watch (Although I didn’t realize it at the time, it was the first of many times I would use movie viewing as a way to help myself through a sickness).

I wasn’t too excited to be in the hospital on Christmas, but having my family there helped a lot. They brought all the presents Santa had left for me, which made me temporarily forget where I was. My brother Tom gave me a Ray Bourque rookie card, which I have cherished to this day. My brother Jon gave me a copy of Guns N’ Roses GNR Lies and told me to make sure I didn’t “leave it around for anyone to look at” (there were very explicit pictures and words inside). The presents were great, but being with my parents and siblings is what really made that Christmas as normal as it could be. And if my brother Jon promising he’d take me to see the Naked Gun movie as soon as I got out didn’t help speed up my healing, nothing would!

After 10 days of the doctors telling me Crohn’s was all about, being taken care of and appreciating nurses, and visits from my family and friends, I went home on New Year’s Eve. Our dog Murphy was so excited to see me, he ran right past me as I walked inside. I don’t even think I made it to midnight, but I didn’t care. I was home and I was okay. I wasn’t worried about having Crohn’s or thinking of what might happen to me health wise in the future. I was just happy.

Since that first hospitalization and diagnosis, I have dealt with the ups and downs of Crohn’s Disease. I have had good days and bad days. I have been on various medications with some working better than others (the initial Folic Acid and Sulfasalazine didn’t seem to make much of a difference). I became more aware of the prevalence of Crohn’s including the following year, when my father had NHLer and Crohnser Kevin Dineen sign a picture for me and wish me “healthy holidays”. I learned which foods sometimes made me “Crohnsy” and tried to avoid them or just took a chance and dealt with the consequences. I got used to doctors sticking their fingers in places that weren’t too enjoyable. I ran into people who were understanding and others that had no clue…

One person in particular, I could not believe. The year I was teaching in the public school system (I won’t mention the town, but it rhymes with “Shopkinton”), I started having some really bad Crohn’s symptoms. I was in a lot of pain, and knew I needed to see my doctor. After examining me, he ordered a GI scan (the fun one where you drink Barium) and told me what he thought was happening. He said the area where my surgery had connected my small and larger intestines was most likely scarring up and causing my bowels to back up. The test would show exactly how bad it was, and would let him know if I needed more surgery. When I relayed this to the principal of my school, she said “I’ve never heard of anyone needing surgery for Crohn’s…”. I said nothing to her then, but now I say I hope you’ve gotten an f’n clue.

Yes, some days are worse than others when it comes to Crohn’s. Stress doesn’t help and neither does Mexican food (but it’s so tasty!). I have cut down a lot on the caffeine intake and “just said no” to most vegetables – especially the green leafy ones! Some days are “many trips to the bathroom” days and some are “can’t get out of bed” days. I just take it day by day and remind myself that I am on the lucky side with this disease. There are many people who have Crohn’s that are in and out of the hospital all the time. Since my first hospitalization, I have only had to stay in the hospital one other time for my Crohn’s. That was in April of 2008 when I was having similar (but worse) symptoms to the whole “non-sympathetic principal fiasco”. That time after the doctor explained all the possibilities to me (including possible surgery) he asked me if I had any questions – I asked him if I was going to be able to watch the Bruins game that night. I was in the hospital less than a week, and didn’t need ay more surgery. Crohn’s does suck, but I have been very fortunate with how little it has affected my life.

When life gives you a chronic disease like Crohn’s, you have a choice. You can sit there and complain, moan, whine, and spread the misery it is causing you. Or you can take it in stride, get through the bad days, keep your humor, and remind yourself of the positives. I may have Crohn’s, but Crohn’s doesn’t have me. What I do have is an amazing support system made up of my awesome family and wonderful friends. And thanks to that Christmas in 1988, I know what really counts during the holidays…

PS- I got this shirt on Zazzle!

And My other Crohn’s shirt - http://davestshirts.blogspot.com/2010/08/t-shirt-235-it-passes-here-with-song.html