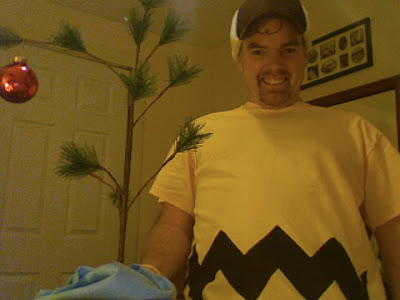 Back sometimes in the 80s, my brothers and I thought it would be fun to celebrate Christmas by lip-syncing our favorite songs on “Christmas Eve Eve”. Back then that meant Ratt, Poison, Cinderella, Bryan Adams, Twisted Sister, and Motley Crue. My brother Tom and I made guitars with poster paper and a wood neck, careful to draw all six strings and fill the body with cool colors and things like “Eve Eve ‘85”. Older brother Jon was in charge of the audio and lighting. In the earlier years that meant changing cassettes quickly, using flashlights as spotlights, and turning the room lights on and off quickly for a strobe light effect. As technology and our budget increased over the years we graduated to making mix tapes, getting a real strobe light, and using a multi-colored flashlight.

It didn’t take long for everyone to take their seats at the concert venue, which was one of our bedrooms. The capacity crowd was usually just the two McGrath sisters, and a few years our cousins the O’Neills managed to scalp a couple of tickets outside.

Of all the years we did an “Eve Eve” Concert, a few memorable moments come to mind. One was the year Tom was the lead lip-syncer for Twisted Sister’s song “The Price”. Not far into the song, Tom forgot the words and made a quick decision to face away from the crowd for any lyrics that weren’t the chorus. Another year, one of our neighbors (Scott O’?) came over during the show – I think he just needed a cup of sugar. Apparently my father thought we were playing the music way too loud with company over. He opened the door in the middle of a song (Ratt “You’re In Love” is very likely), and told us we had to “Keep it down, we have company!” Yet another time, I had picked up a Stryper tape that had their version of “Winter Wonderland” on it. During the performance, my brother Tom and I threw out candy canes to our adoring fans.

All I can say now is I wished we had pictures and videos of these Eve Eve concerts.

After years of thinking we were “too old” for these concerts, my brother Jon started another pre-Christmas tradition. He and his wife Jen started having people over to watch the Christmas cartoon specials. I believe the first time was right after they got married 15 years ago, back at their apartment. Back then it was a little more casual – come hang out and we’ll watch a few Christmas movies. Since, there have been themes (come dressed in your PJs), trivia contests (these stopped after I kept winning), and door prizes.

Now, in addition to having 3 more McGraths running around, there is a whole voting process for which Christmas specials we watch. My brother Jon hands out paper and pens and collects all of the secret ballots. Each title (or quote or reference) is read and tallied to figure out the winner. Occasionally there is a tie and we must vote again, but with only two special to choose from. And you never know what will win. Two years ago, the He-Man Christmas special won a round. Shrek the Halls has won a couple of times. The Grinch usually gets in every year, while Charlie Brown sometimes gets the shaft. And I don’t think Frosty or Santa Claus is Coming to Town have been viwed in quite a while (There are a few more “adult” things we watch after the kids go to bed like SNL skits or the very homo-suggestive Happy Holidays with Bing and Frank (http://amzn.to/bingfrankxmas) – always a riot).

Which brings me to the other part of Eve Eve: lobbying. Before each vote, anyone can address the room to try and pull for which cartoon they would like to watch next. I’m hoping my get-up will have us all singing “Hark the Herald Angels Sing” at some point tonight. This year, there were even emails sent out from “Frosty” to try and build up support for a Frosty viewing this year. Whatever we vote to watch, it’s always a great time!

I must also mention probably the funniest Eve Eve moment. It happened last year while we were playing a round of Holiday Mad Libs. My sister Megan was writing in the words, and it came to my nephew who was thinking of a plural noun. He was thinking and thinking some more. Then someone told him to just say the first thing that came to his mind. He yelled out “Vaginas!” and everyone in the room burst out laughing for about 10 minutes – especially my friend Glen and his wife Krissy who were at their first “Eve Eve” celebration.

December 23rd is definitely a day and night I look forward to every year. It reminds me of the time when things (like Christmas cartoons or the Wizard of Oz) were only on once a year. You had to plan around it and if you missed it, you had to wait until next year – it was more special that way. Eve Eve is a very special time to me. It’s time I spend with people I love the most and is always a laugh-fest. Looking forward to another great Eve Eve tonight, and many more to come!

And thanks to JB for use of the tree!