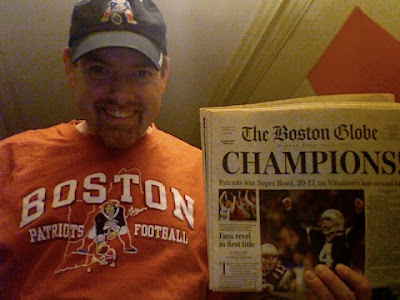 Yes, in case you didn’t know, the Patriots (a.k.a. “Pats”) were originally called the Boston Patriots. They didn’t change their name until March of 1971 when they relocated to Foxboro (http://www.patriots.com/history/index.cfm?ac=history).

The Patriots did make the playoffs in 1985 and won their way to their first Superbowl appearance by beating the Miami Dolphins. Although after they “ Squished the Fish” the saying became “Berry the Bears” (for then coach Raymond Berry), the Pats lost to Chicago 46-10 in what was at the time the biggest loss in Superbowl history. Bledsoe and Parcells brought the Pats back to the Superbowl after the 1996 season, but that time they lost to the Packers and Brett FAR-Verah. It was yet another Massachusetts team that got close to winning a title, but fell short.

That all changed in 2001 when I went to my first Patriots game. Although it was only a preseason game, I did get a glimpse into what would turn out to be an amazing season. After Drew Bledsoe played for two series, I watched backups Damon Huard, Michael Bishop, and some guy named Tom Brady play for the rest of the game (http://scores.espn.go.com/nfl/recap?gameId=210810017). Bledsoe got knocked out of the second game that season, and the rest is Patriots history – the run to the playoffs, the Snow Bowl, beating the trash-talking Steelers (including Bledsoe playing for an injured Brady), and the unbelievable Superbowl win on the last play against St. Louis. The best part of watching them win the Superbowl was I did it at the O’Neill’s with my uncle and cousin who are two of the biggest Pats fans I know.

But, the Patriots weren’t the first of my favorite teams to win it all. In 2001, the Boston College hockey team won a national title. The Pats won the next year, and then things got a little crazy. The Pats won again in 2004, then the Sox won, then the Pats won again. In 2007, the Sox won again (I know!) and the BC football team was ranked #2 at one point. Although the Pats bid for perfection fell one lucky completion short, the BC hockey team won it all again in 2008 (as did the Celtics!).I will never get used to any of my teams winning a championship, but it has been nice to see Belichick and the Pats have so much success over these past 10 seasons.

Okay, game time for the 9-2 Pats and 9-2 Jets. Even though this is a Pats shirt, all that’s left is for me to see a Bruins Stanley Cup Championship. Go Pats, go B’s, go BC, and go Sox!