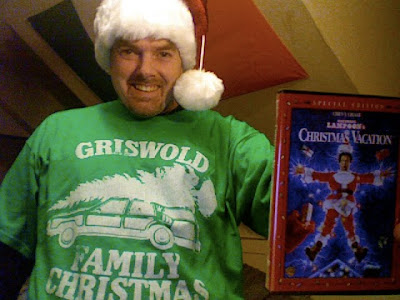 Even though A Christmas Story is a classic, Christmas Vacation is my favorite Christmas movie (The Ref comes in second place).

Thanks to my brother Jon and his family for donating this (and many of the others) t-shirt to the blog!

Like A Christmas Story, it is hard to narrow down Christmas Vaction to my favorite parts. I wanted to include the Clark Griswold “flipout” scene, but I guess there are copyright issues with having the audio online. Every clip I found of it had no sound. Here’s the quote:

“Hey! If any of you are looking for any last-minute gift ideas for me, I have one. I'd like Frank Shirley, my boss, right here tonight. I want him brought from his happy holiday slumber over there on Melody Lane with all the other rich people and I want him brought right here, with a big ribbon on his head, and I want to look him straight in the eye and I want to tell him what a cheap, lying, no-good, rotten, four-flushing, low-life, snake-licking, dirt-eating, inbred, overstuffed, ignorant, blood-sucking, dog-kissing, brainless, dickless, hopeless, heartless, fat-ass, bug-eyed, stiff-legged, spotty-lipped, worm-headed sack of monkey shit he is! Hallelujah! Holy shit! Where's the Tylenol?” –Clark Griswold

Below are a few other great moments from the movie – another one I highly recommend seeing Christmas Vacation if you haven’t yet.

Although the McGraths never had a SWAT team come busting into the house during the holidays, we have had our share of Griswold-like moments over the years. We did have adventures picking out our yearly family Christmas tree –but my father never got caught underneath a truck as we drove there. I did “help” my dad cut the tree down the year my younger sister Megan was born. Yes, I was not even six at the time, but I definitely held the tree as my dad cut it down.

Most of the drama during the holidays in out house usually revolved around taking the yearly Christmas card picture. This was the during the pre-digital age, so we had to deal with two things: One, the limited number of film rolls my dad had. Two, that we didn’t see what the pictures looked like until after they had been sent in for developing (1 hour photos existed, but were much more of a luxury back then). That, and there were also 5 kids who all had to have something resembling a genuine smile on his/her face at the same instant. Each year, there was usually one of us who stormed out of the room upset over something (I’m betting if we could look back at the footage I would lead the McGrath League in Christmas Photo Walk-Outs). But, we did get the picture done every year – even if my father had to resort to desperate measures like the one year he mooned us. What can I say, it worked!

The McGraths did have almost an exact replay of a Griswold family moment, although it was from the original Vacation movie. We planned a trip to Williamsburg, VA and the highlight I was looking forward to the most was checking out Busch Gardens. But when we got there, we found out the park was closed. Luckily, my father didn’t go out and buy a BB gun to force a park employee to take us on the rides. We opted for attraction number 2, Colonial Williamsburg, and had a really good time (but those roller coasters would have been sweet, I’m sure!).

We did have and have our own Christmas traditions , but I will write more about those tomorrow…