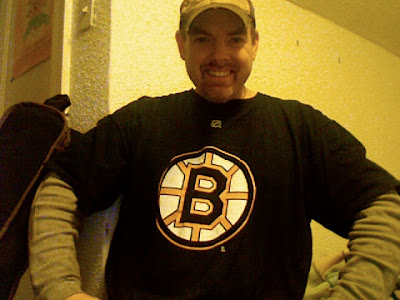 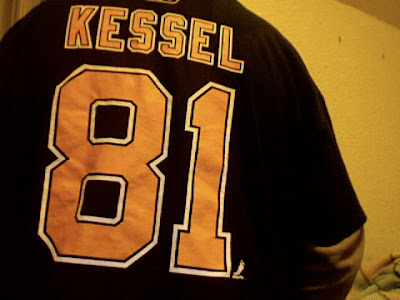 I had a little self-debate when it came to wearing this shirt today. On the one hand, I was a big fan of Kessel when he was on the Bruins (hence, the shirt). On the other, I think if he really wanted to stay in Boston he would have. But it is impossible for me to forget about the fact that he is a cancer survivor too. His battle may have been a lot shorter than mine (In the hospital on December 11, 2006, cancer free on December 16, back in Bruins lineup January 9, 2007), but that really does not matter. My battle with this disease was a lot shorter than many, many, many other people. And I wasn’t alone in my battle – I survived cancer along with my family, friends, and every person my mother had praying for me. I’m sure those close to Phil Kessel were just as worried about him as others were worried about me.

I love hockey. I have for a long time, and will for the rest of my life. I will play it until my legs no longer allow me to skate (I’m hoping at least through my 60s). But really when it comes down to it, hockey is just a game (okay, it’s the best game, but a game nonetheless). Cancer on the other hand, is something far more than a game. It affected me and Phil Kessel directly. It also affected Justin, Danny, Greg, Casey, Linda, Diane, Bob, all the Hope Lodge guests, and I’m sure many more people that we all wish didn’t have to go through any of it. This one is for all those people that have battled or are battling cancer, and all of those people battling along with them. And even though he’s playing against my favorite hockey team tonight, this one is also for Phil Kessel…

Stand Up To Cancer (http://www.standup2cancer.org) used that Eddie Vedder song (titled Rise) as part of their campaign…great one, isn’t it?

Oh, and by the way. Interesting thing about this shirt: My awesome mom gave it to me on my birthday (March 31, 2007), which was the same day Phil Kessel was named as a candidate for the Bill Masterson Trophy (http://en.wikipedia.org/wiki/Bill_Masterton_Memorial_Trophy), which he ended up winning that year.